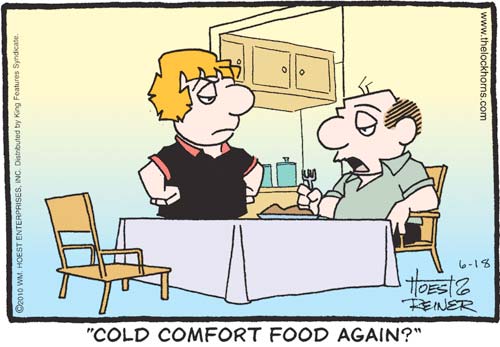 After more than four decades of Lockhorns dinnertime spitefests depicted from a point of view more or less level with the tabletop, today’s panel attempts to play with perspective a bit, showing us what it would be like to cower on the floor about three feet away from Leroy and Loretta as they eat. (Obviously, they’ll ignore you, as their mutual loathing is far more interesting to them just about anything you can name.) In addition to adding a bit of visual flair, this new viewing angle really gives us a good look at their dining room chairs, which they’ve clearly had specially made with incredibly short legs to accommodate their freakishly stumpy frames.

I have to say that if, back when Rex and June discovered Brook lurking in their house, you had asked me to predict how this story would turn out, I would have not have considered the possibility that she would end up using her martial arts skills to disarm a knife-wielding thug. In fact, I would not have made this prediction a mere three days ago. But to be fair, I don’t think we’d ever seen Brook’s ripped inner thigh muscles, a result of the long hours she puts in at the dojo keeping herself in peak physical shape.

Wow, so Judge Parker is really going to go through with this shoe business, huh? At least today’s strip accurately depicts what would happen if you got a lawyer involved in footwear manufacturing.

In a desperate, last-ditch effort to end this conversation with Mary, Jenna’s brain has just triggered a massive stroke.