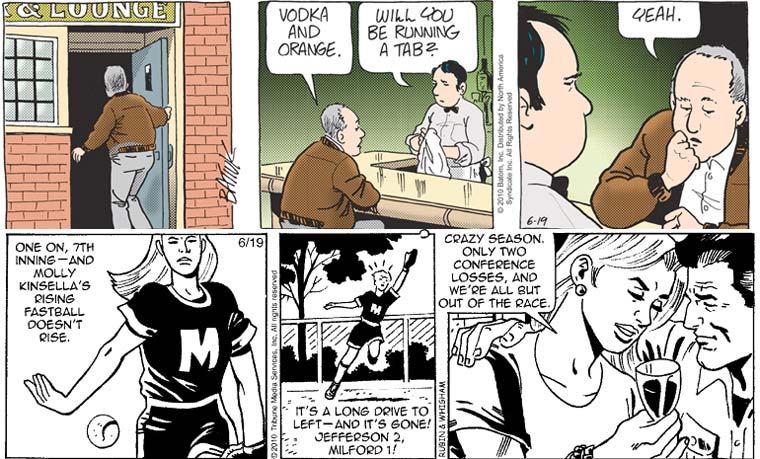 I do bring up the concept “Chekhov’s Gun” a lot in this space — the Russian playwright once noted that “if in the first act you have hung a pistol on the wall, then in the following one it should be fired” — but only because it works so well conceptually with the the painful plotting of continuity comics, in which you always, always see the horror/delight coming. For instance, every cell in every character in Funky Winkerbean is tiny microscopic Chekhov’s Gun, just waiting to burst into glorious deadly cancer. The title character’s own simmering alcoholism serves a similar role, with the question not being if he would backslide into a hateful downward spiral of boozing but when. And now the answer to that when has been revealed to be “twenty minutes after he put his dad into a nursing home.”

But sometimes you don’t see these things coming, and that’s always a pleasant surprise, even if the results are unpleasant for the characters concerned. For instance, I would never have picked Coach Mrs. Coach Thorp as one to drown her sorrows at her coaching failures in booze (though the booze in question is a nice glass of red wine, because she is classy, and a lady). Still, it makes sense, as her husband is pretty much drunk all the time, which is why he doesn’t care that he hasn’t won a championship in any sport in years. He seems pretty happy, so why wouldn’t she follow his example?

Longtime readers of Snuffy Smith know that Parson Tuttle, Hootin’ Holler’s only clergyman, is a fraud who plays upon the simple hill folks’ earnest religious impulses to line his own pockets. Thus it should come as no surprise that the ministership of the local ramshackle church is actually a Tuttle clan sinecure, jealously kept within a single family whose members lost their faith generations ago, but refuse to give up a cushy gig.

It’s actually pretty rare for me to discuss Ballard Street, as it usually consists of insane people doing inscrutable things in a more or less amusing fashion, which doesn’t leave much room for commentary. As far as I can remember, it never, ever features talking animals of any sort, which makes today’s horror even harder to explain. The people in the comic sometimes dress up in elaborate costumes; are those meant to be people in cowsuits? If so, the business with the “udder” is even more nightmarish than what a plain reading of the strip would suggest.

When ordinary mortals lose a pet, they tape signs announcing the fact and the associated reward to lampposts throughout the area where the poor little critter might be. When Mark Trail loses a pet, the local daily paper runs an enormous picture and a two-column story about it in the A section. Why isn’t this on the front page? Was there a nuclear war or something? 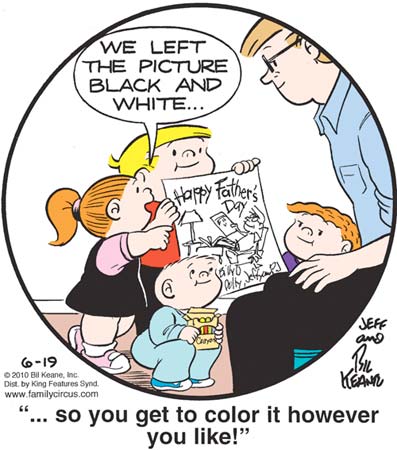 Big Daddy Keane will be using the crayons to depict himself as a member of a non-white ethnic group, so that he can look at the picture and pretend that he is not related to this gaggle of monsters.