Never let it be said that Dick Tracy phones it in. You could have been excused for thinking that Saturday’s strip was a the finale of the latest rambling, baffling plot that couldn’t be forced into some sort of coherent shape no matter how hard you tried; however, we’re clearly going to spend all of this week with the characters doing a half-assed attempt to explain it further, to no avail. Plus, that callous disregard for human life or dignity is the strip’s trademarked value-add. Yeah, Anja Nu, what a loser! Winners don’t get die in terror as they get cut in half by an airplane, am I right, people? 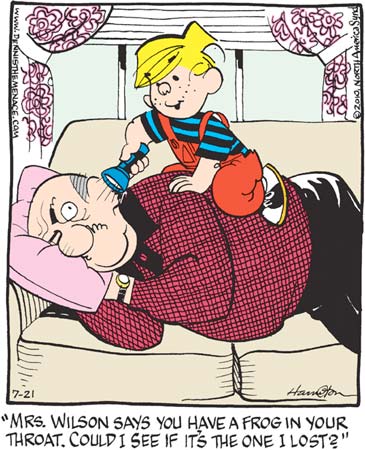 Whoops, it turns out that Torrey Pines and Kemper Lakes are real-life golf courses, not made-up gated communities. It looks like my family was right and my aggressive refusal to learn anything about golf has come back to haunt me after all!

Meanwhile, this mustachioed golf impresario’s angry reaction to a “hronk” intrigues me. I’m not sure what a hronk is, but since to my knowledge “hr” sounds are generally restricted to Slavic languages, I think we’re all going to learn a valuable lesson about how wrong-headed it is to discriminate against Eastern Europeans. Will newspapers print racially charged but dramatically necessary dialog like “Get off of my golf course, you filthy bohunks”?