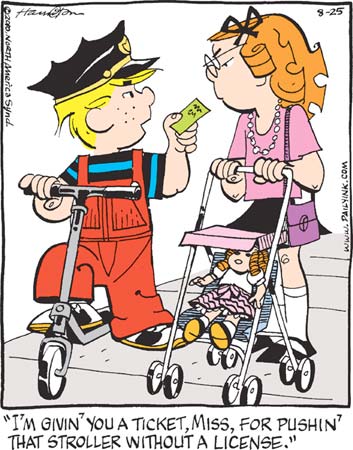 It seems at last that Dennis has found something truly menacing to do: serve as a self-appointed eugenicist enforcer. “Miss, did you have authorization from the Central Hereditary Bureau to bear that child? I can tell by looking at you that your genome is suspect.”

Gil Thorp has managed to find something duller than golf in real life or golf on TV: golf in the comics. Yes, I know we’ve been talking about golf in the strip all summer, but the last few … days, I guess (it seems like years) have been taken up by an actual single golf game. It’s been so boring that Torrey is well aware that most of the readership has dozed off, and is attempting to poke them to wake them up in the first panel. The person I really feel for is the behatted multi-chinned dude in the first panel. You can tell he’s all excited about his big Gil Thorp cameo! Wore his best Hawaiian shirt and everything! Too bad it’s in such a snooze-inducing strip.

Why is Mike surrounded by a halo of distress in panel two? Does he fear that his father is going to die of massive liver failure right there in front of him, and he’ll be responsible for disposing of the gin-soaked body? Or is he disgusted that the old man is satisfied to go to his grave without having tracked down Richie’s killer, thus becoming a failure at officially everything?

Pluggers know that the chances of their working up the energy to have sex with one another will be improved if they can’t see each other.