So there’s multiple boring storylines going on in this fall’s Gil Thorp, most of which revolve around golden boy/team captain/foster child Cody Exner, who is selfless and noble and may be buying drugs down at the park in the middle of the night, who knows, probably it will end up being something stupidly innocuous. But today’s strip contains one of the most subtly hilarious panels in many weeks of Gil Thorp, featuring young Cody frolicking with his real, unfit parents. Look, mom is smoking! And dad has a damn ponytail! Monsters! Presumably Child Protective Services stumbled onto this bucolic scene mere moments later and whisked young Cody away to a better life, where tobacco is forbidden and no man’s hair extends below the collar.

It’s even funnier to imagine that Cody is buying drugs down at the park and this story about his parents is an improvised ruse, because that would probably mean that the “parents” in his vision are just his dealers.

There were some hints at the beginning of this storyline that the Mole Man was going to drag Aunt May down to his subsurface kingdom and make her his unwilling bride, and Spider-Man would be required to preform a certain degree of superheroics to rescue her. But now it looks like the subterranean weirdo and Peter’s aged aunt are going to embark on a wholly consensual romance, which means that the drama will involve Peter whining about having to go have dinner with them despite the fact that the Mole Man creeps him out. This is frankly much more this strip’s speed.

Oh, God, those aren’t the eyes of an adorable and mildly mischievous tyke; those are windows into a soul of PURE EVIL. Leroy knows that what he’s done was wrong, and that’s exactly why he’s going to do it again and again.

But where will he find his bride? 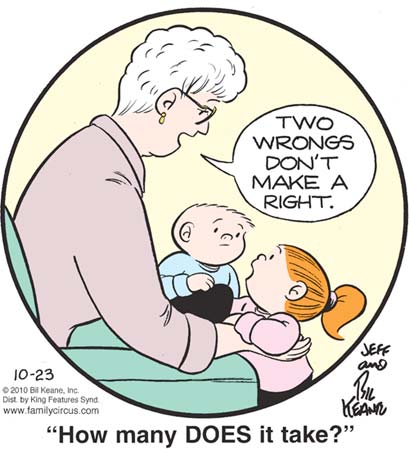 “How many sins must I commit before the voices in my head stop, grandma? HOW MUCH EVIL MUST I DO TO MAKE THINGS RIGHT?”