So for no reason other than to drive the narrative, Rachel here has been pitching woo very hard at sad, damaged PTSD case Wally, and earlier this week Wally’s ex-wife slipped her a note on how Rachel could better “help” him. Naturally it was a list of his favorite pornographic films, and now Rachel is going to debase herself further by going and renting (or, God forbid, buying) these from the smut store when there is plenty of perfectly good free pornography on the Internet. This attempt to establish carnal relations will founder like all the others, though, as Wally is, perhaps understandably, less keen on watching dirty movies and screwing and more immediately interested in getting food into his house while avoiding the possibility of having a psychotic break and shooting up the supermarket. Presumably Rachel will find the whole scenario to be a libido-killing level of depressing, and the two of them will just spend the evening at opposite ends of the couch, silently watching Hot Army Lesbos 8 or whatever. Happy Veteran’s Day, everybody! 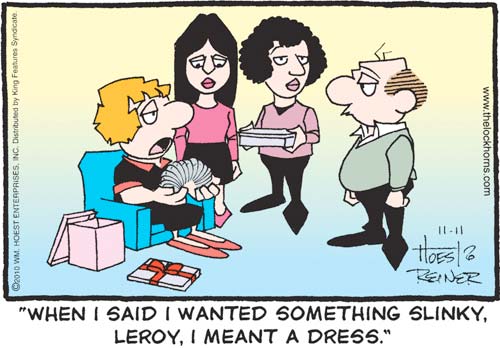 Somehow, The Lockhorns manages to mine sexual incompatibility for laughs somewhat less depressingly. Who are these party guests in the background? Did Loretta really want her friends to see whatever stab at “sexy garment” a tasteless schlub like Leroy would come up with? I like the way the woman on the left has her gaze cast downward, avoiding eye contact with everyone as she tries to make herself invisible in the midst of all the awkwardness, while the woman on the right is staring directly at Leroy, quietly judging his inadequacies.

You know who’s not inadequate at all, though? Mark Trail! Can Mark scramble down a cliff to pull a guy out of a car that has burst hilariously into flames? You bet! Does it matter that Mark already punched this guy out earlier? Nope! Mark giveth (punches) and taketh (you) away (from burning cars)! Mark does it all!

If you need proof of how super-lame Adrian is, consider how the scene in panel one, in which her fiance smarmily and obnoxiously invades the personal space of her hateful, critical supposed friend, results in her look of near-religious ecstasy in panel two. “Yay, my man and my best girl friend are finally resolving this conflict that has torn me up inside!” she seems to be saying, when she should think “Jeez, I gotta meet some new people.”

Sadly, from Jill’s whisper-balloon in panel two, it appears that this is not going to be a battle of implacable archetypes who need no motivation other than their own inborn nature, but rather a dispute over, like, love or something. Presumably Jill’s hostility towards Scott and Adrian’s relationship is based in her secret love for the former, and her knowledge that her sharp, strong personality would be a better and more interesting fit for him than bland, boring Adrian. (Normally, it would also be possible that she would be in love with Adrian, but that would be interesting, so it won’t happen.) 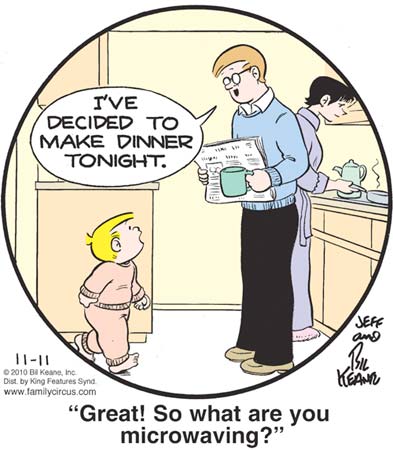 The funniest thing about this to me is the fact that Big Daddy Keane is wearing a completely different set of clothes than his wife and son. “I’ve decided to make dinner tonight!” he announces cheerily. “Does anyone know when ‘tonight’ is? Is it ‘tonight’ right now? I’ve done a lot of meth and I’ve been awake for days!” Billy and Mommy, meanwhile, have been doped up and lolling around the house in the same filthy pajamas, in and out of consciousness, for the better part of the week.