Good lord, this strip has presented few more nightmarish visions than today’s panel two (and this is a strip that earlier this week featured a disinterested Sarge feeding a bed full of blood-sucking parasites). I guess the point is that the soldiers have been eating so much pork that they’re pretending to turn into pigs (proving that Beetle Bailey is written for and possibly by eight-year-olds), but there’s something about the way they’re all throwing their heads back and closing their eyes making animalistic noises that implies to me an insular group that’s gone off the rails in a deeply creepy way. To avoid “cannibalism,” these self-proclaimed pigs will now spurn the smallish ham and fall upon their cook, tearing him limb from limb and consuming his flesh, oinking all the while. 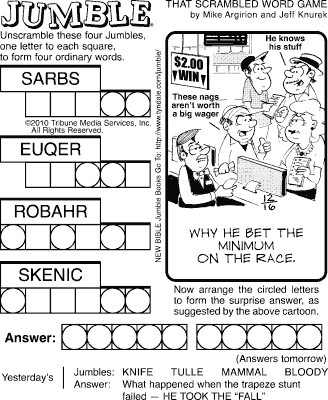 The Jumble is definitely one of those strips that I wish I could see as a larger-format image sometimes. Today, for instance, I am fascinated by the three hairs that constitute this horse racing guru’s combover. Rather than flopping greasily over his pate Wilbur Weston style, they hover over his head as if repulsed from his skin by a static charge, presumably barely being held in at the roots.

So here’s our villain Ben Smith, and, um, wow. In any visual storytelling medium, we’re supposed to get a read on a character via their appearance, but I have no idea what message the combination of bald, shaggy, mustache, cravat, open-collar dress shirt, and lime green v-neck sweater is supposed to signify. Is it supposed to be “gay” by way of “fussy fashionista”? Under normal circumstances of course one would not associate this outfit with “fashion” in any sense, but then again this is a strip in which Mark just throws an enormous brown jacket over his khaki jumpsuit and calls it “dressing up.”

Well, now that I see Spider-Man is planning on punching a dazed, unresisting Mole Man in the face, I guess I should apologize for calling him a coward.