There’s something sincerely baffling to me about this strip: the scene itself, with the falling snow and the bureaucrat flanked by axe-wielding thugs, is quite evocative, and yet does not appear to contain a joke or joke-like material of any kind. Is supposed to be “funny” that the tax department has denied Hagar’s request with a mildly jocular retort, and that the taxman is reading this off a sheet of paper? Is the fact that the response contains the phrase “cold day in July” rather than the obviously intended “cold day in hell” part of the joke, or was it imposed by the strip’s editor? Does the frigid winter scene somehow relate to the gag, or does the conceptual overlap merely serve to distract us from the point? What is the point? I sit here staring much like Hagar himself, wide-eyed and baffled.

Blah blah blah Jill’s tragic past blah blah blah fiance looks like skinny Wilbur with a bad wig blah blah blah she lashes out because of her emotional wounds blah blah HOLY SMOKES LOOK AT THEM PIES! It seems that Mary has taken Jill to some kind of wonderland where pies just sit out on shelves, ready for the taking. How can she even focus on Jill’s completely predictable tale of woe when there are delicious pies just inches from her head? The smell must be overpowering!

Ha ha, that stock market! It’s sure going up! Or perhaps down? These two strips appear immediately adjacent to one another on my digital comics page, which is kind of unfair to the Snuffy characters. We ought to be impressed that the residents of Hootin’ Holler have finally moved beyond barter to the money economy and are even dimly aware of higher finance; but this achievement is eclipsed by the fact that even Sarge’s dog is well acquainted with modern capitalism. 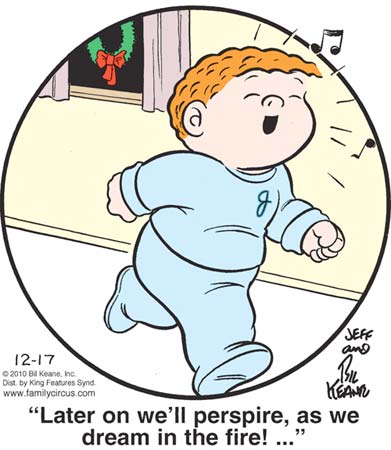 Yes, there’s nothing more adorable than a little tyke singing happily about being set ablaze! This one is getting cut out of the paper and put up on pyromaniacs’ refrigerators everywhere.