It’s fun to watch Lu Ann’s high hopes for this relationship rapidly vanish. I imagine that her big dreams for a working-class guy who just up and kissed her the second time they met involved lots of hot sex and not really talking much. Now he’s whining about how he’s finally realizing at age 30 that maybe he shouldn’t live with his parents and that he’s fallen in love with some mouldering shanty in Losertown, N.J.; he also appears to be threatening to drop the L-bomb on Lu Ann, so you can see why she’s decided to fake a heart attack in the hopes that he’ll go away.

The Spider-Man arc just now wrapping up has been utterly delightful in its ridiculousness, but the final panel promises something even better. Perhaps, having seen up close what true love can be, Mary Jane will realize what a loser her husband is and finally dump him. How will our superhero deal with heartbreak? Presumably he’ll spend weeks moping around the house, complaining ineffectually and watching TV and … oh, wait.

I once speculated that the Wizard of Id supported legislated health-care reform, but it’s now clear that the strip is taking a much more radical and troubling approach. 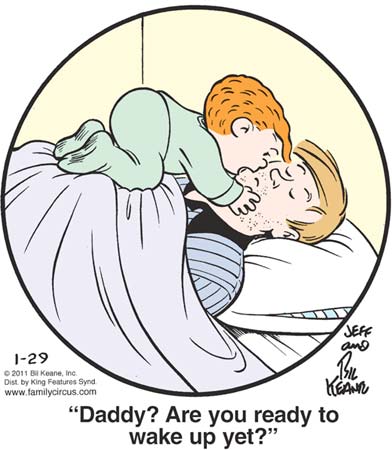 Jeffy only has to ask this two more times, and if Daddy still doesn’t answer he gets to eat him!