Oh hey, what’s going on with Gil Thorp’ presumably gay basketball prodigy? Well, it turns out the only thing he cares less about than winning basketball games is love, or at least yucky heterosexual love. But don’t worry about this negative stereotyping; for “balance,” his devout Christian future nemesis also turns out to be a brutal elbow-throwing thug.

Anyway, we can’t possibly be mad at Lini’s heartlessness, since his advice that Kayla dump Parker brought us the delightful and hilarious scene in panel two, where Parker is ripping off his own face out of grief. His friend sure seems to be having a good time watching the waterworks. “This is better than TV!” he thinks, while stone cold munching on a sandwich.

I’m going to pass over the rather predictable revelation that going on about your delusions of world-changing grandeur will cause Margo to want to do sex things with you, and instead focus on the freakish vehicle that has brought them to the deserted, pristine hillside that Trey will despoil with his green energy McMansion. Is that a Volkswagen Thing? Is Iris still passed out in the back seat?

Ha ha, Wilbur doesn’t have any idea how to work a Twitter machine! He’s just trying to lure Mary and her groceries back to his apartment, as he suspects she might have a jar of delicious mayonnaise in that bag. 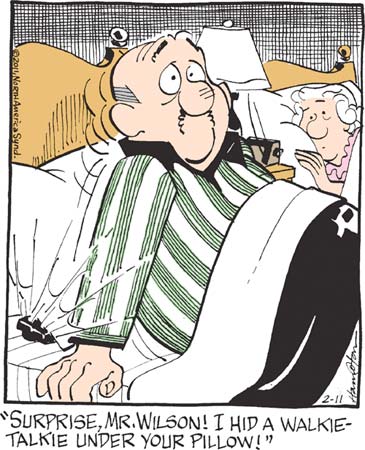 “Oh, and how come you and Mrs. Wilson have different beds? Dad says it’s because you’re a couple of sexless old farts, but it always smells nice at your house!”