Remember a few years ago when Mark’s friend Dan faked his own death by drowning and Mark, thinking he was witnessing a tragedy, begged his friend to “COME ON, DAN. COME TO THE SURFACE!” I’m reminded of that in today’s strip, as Mark orders this plane into the air. Never mind the fact that this particular drug-running aircraft has taken off from exactly this runaway dozens of times; Mark seems to feel that only he can coax it airborne. I was going to say that Mark apparently believes that he can lift things or people with his mind, but then I realized that Mark, who speaks aloud every thought he’s ever had, doesn’t really understand the distinction between an inner self and an outer world well enough to really grasp the concept of a “mind” in the first place. I actually think that Mark believes he can lift things or people by shouting at them.

“Well, gee, I thought I was fighting him just moments ago, but if he and the woman who loves him say that I wasn’t, I must be wrong! I mean, what motivation do they have to lie about it?”

Sarge needs Beetle active and productive, and if that means getting him back on the meth, then so be it.

She wasn’t quite subtle enough this morning, but one of these days, Margo’s going to trick Tommie into coming out. 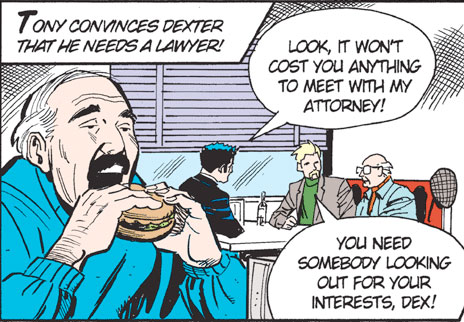 Rex Morgan is still very focused on its increasingly uninteresting lottery drama, but that doesn’t mean it can’t liven things up with a mustachioed man cramming an entire hamburger down his throat in one gulp.