Oh my God, John Thrasher’s been driven mad by the horrors he’s seen on the battlefields of Iraq Afghanistan Iraq Vietnam Korea (yeah, that seems about right) and has retreated into the deep woods, ready to unleash hell on whoever tries to talk him back to civilization. Seriously, is there a more badass name than “John Thrasher”? Mark might actually have a moment or two of difficulty in attempting to subdue this wayward PTSD case, though I’m less worried about his chances now that I know that he can just shake off a bullet to the head.

Speaking of war-related trauma, Beetle Bailey seems to have taken a rather abrupt turn. After 50 years of living in some kind of peacetime paradise, the soldiers of Camp Swampy have suddenly been thrust into an apocalyptic worldwide war, in which they’ll be forced to fight until they qualify for old age benefits … if they live that long.

Speaking of abrupt turns, two-thirds of the way through today’s Gil Thorp the creative team apparently decided that nobody would be able to follow the confusing softball drama and decided to switch to confusing corporate drama instead. 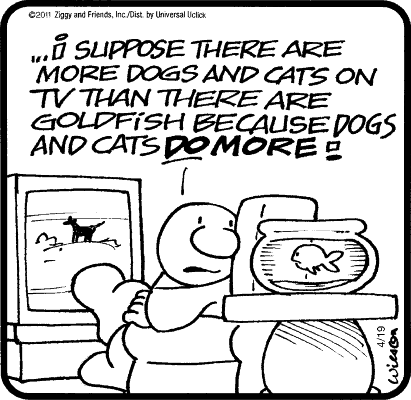 At last, Ziggy has found someone he can look down on! It’s his goldfish. Does mocking and belittling your goldfish make you feel like a big man, Ziggy?