When is it time to start paying attention to Mark Trail? When the violence starts, obviously! Young John Thrasher suddenly shows the benefits of his military training and steely nerves by announcing his refusal to cooperate with law enforcement authorities, rapidly covering several feet, and then kicking the sheriff in the solar plexus, all while he has a rifle pointed right at him. He shows the benefits of his good breeding and essentially gentle nature by apologizing for this act of derring-do while he’s still in the process of perpetrating it.

There’s been a slight but noticeable uptick lately of Trailian good guys physically assaulting law enforcement officers. To be sure, it’s all to forward the cause of good in the long run, but can this “ends justify the means” philosophy really co-exist with this feature’s traditional straight-arrow morals? Eventually, the strip’s whole universe might devolve into chaos; fortunately, the strip moves slowly enough that by “eventually” I mean “millions of years hence, long after the Earth’s sun becomes a red giant star, wiping out all human life.”

The idea of a man’s mother casually asking him about his infidelities is both grotesque and par for the course in Momma, where Mother Hobbes will go to any length to break up the seemingly happy marriage of her eldest son. Still, we can sympathize with her exasperated expression in the final panel, as Thomas is apparently so lame that he can’t think of any way to stray that doesn’t involve the Internet. 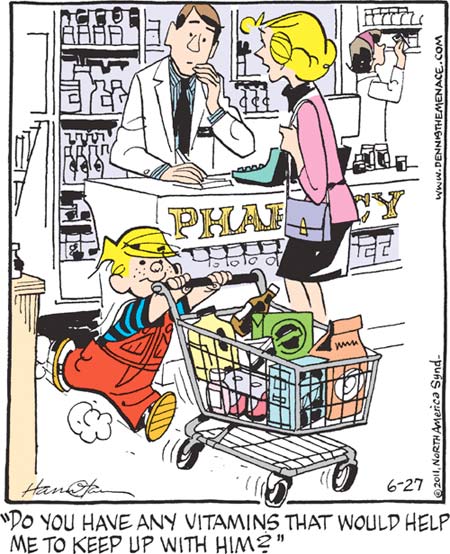 And so began Alice Mitchell’s tragic addiction to prescription stimulants.

Ha ha, jokes on you, mysterious “Big Boss”! You can’t humiliate someone who is incapable of experiencing shame!

Hey, everybody, are you going to enter the Ziggy 40th anniversary contest? Here’s my caption: OH MY GOD ZIGGY IS EATING A CAKE SHAPED LIKE HIS OWN FACE OH MY GOD