Today’s Mary Worth brings us a valuable lesson on how to enjoy Mary Worth — and indeed, explains one of the reasons why Mary Worth enjoys being Mary Worth. Variety is the spice of life, and thus every meddle is different. If they were all the same, what joy or texture would there be in Mary interfering in the lives of her hapless victims? No, she doesn’t know until she’s in the thick of it whether the meddlees will need to literally drink themselves into the gutter before they’re receptive to Mary’s life-molding or whether they’ll just burst into open sobbing and oversharing the minute she asks her first gingerly probing questions. Do you think Mary’s taken aback that Liza has opened up so easily? Don’t worry, Mary, I feel confident that there’s an emotional roller-coaster of insanity in your future, as Liza imprints on you as her new guru/love object and refuses let you out of her sight. 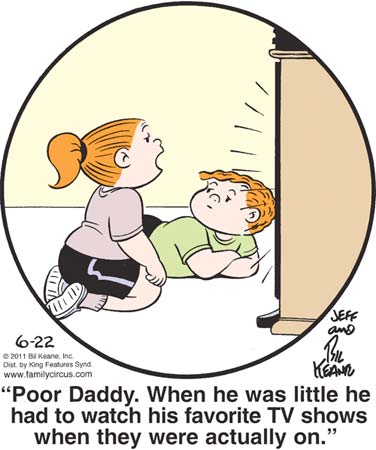 The fact that very long-running strips reuse art and even whole gags is obviously not news. Certainly today’s Family Circus panel, which features the red-headed children dully staring at an enormous console TV that they’re way too close to has the vibe of decades-old art, although for all I know it could have been drawn last month (but surely that would have been a terrible waste of effort?). Anyway, it got me thinking about how there must be endless material to be mined from dead-eyed Keane Kids watching television and saying vaguely cute/precocious things about it, so look for this panel to appear again and again, long after most Americans have forgotten that “televisions” used to be a distinct piece of free-standing electronic equipment, rather than a series of screens built into every wall of every home, switching on and off as you moved from room to room, making sure you were never without entertainment.

Have you ever seen a movie or TV show where somebody interacts with the main characters without speaking, even though that seems kind of off? Once an actor starts talking, they move up to a whole different pay scale, so generally there’s some financial reasoning behind it. Comic strips don’t really work on the same economic logic, though, so that doesn’t explain why Sullen McMaybepregnant here silently thrusts a note a Les before stalking off. Presumably she’s disgusted beyond words that the entire school has been inexplicably driven into a frenzy of arousal by the Les-on-Susan smooching pic that’s been making the rounds. 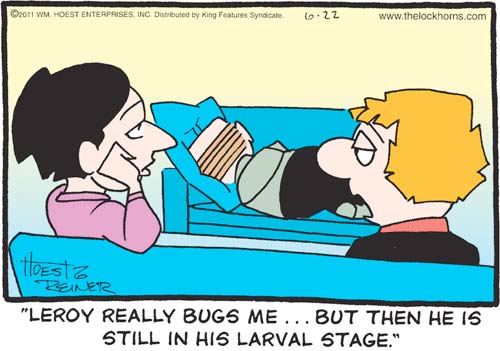 Oh, isn’t that cute! Despite it all, Loretta still believes that Leroy will become a beautiful butterfly. I hope he does too, in the sense that I hope that his squat, misshapen husk of a body will one day split open, revealing an enormous, terrifying insect within.