Does anyone remember a series of PSAs that ran during children’s programming in the late ’70s and early ’80s that tried to convince kids not to scarf down all the delicious-looking prescription medications their parents had in the medicine cabinet? They featured some vaguely Sid-and-Marty-Kroft-esque blue spherical felt puppets with little beady eyes that I guess were supposed to represent pills, and they sang a weird, warbling little tune called “We’re Not Candy,” the only lyrics to which I can remember are the end of the rhyming couplet, “fine and dandy.” They were of course horrifying and made you not want to take drugs, or even eat candy; I don’t watch a lot of kid’s TV anymore, but I’m assuming they’ve long gone off the air. At any rate, this is my roundabout way of getting to the fact that Gracie and her little friend are well on their way to becoming pill fiends.

I hate myself for having become even accidentally aware of the Funkyverse’s dark spiritual pantheon, but isn’t Le Chat Blue the talking cat-demon who appears to taunt Les when he’s hitting a low point of suicidal depression? I didn’t know that this monster had a band, but I’m guessing it didn’t take a lot of data mining for Amazon to suggest its brand of mope-jazz to everyone with a Westview address.

Speaking of suicidal depression, based on Herb And Jamaal’s Nameless White Customer’s thousand-yard stare in the last panel, I’m guessing he’s confused “being haunted by one’s own mortality” with “a mature philosophy.”

“As you can tell by my fashionable attire, I’m a caddie! It’s the summer job to have, if you’re a fan of staring at teenage boy ass.” 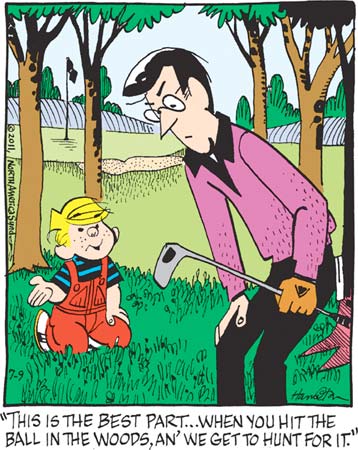 Ha ha, it’s funny because Dennis is taking joy in spending the day with his father, but all his dad cares about is his dumb golf score!