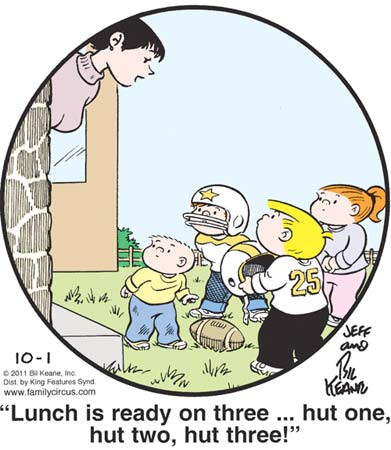 I like the looks of stunned incomprehension on the kids’ faces in this cartoon. “Is she … is she trying to make some kind of football reference? Like, we’re going to snap the ball and … eat … lunch? That doesn’t really work the way she thinks it does.” Add in the fact that the kids aren’t even in mid-play — Billy’s already taking off his helmet, PJ looks like he was less “playing football” and more just “rolling around in mud,” and Dolly is standing by demurely with her hands crossed, as any proper young lady should in the presence of roughhousing — and we can see this as the first of no doubt many doomed, tin-eared attempts by Ma Keane to be a “cool mom.”

Ha ha, what a great encapsulation of all that’s insane and wonderful about the current Lu Ann romance storyline. Paul’s parents worry that it won’t work out between Lu Ann and their son because they’re opposites — you know, a dumb blond who lives in a densely populated city on the west side of the Hudson and a dumb blonde who lives in a densely populated city on the east side of the Hudson. Oh, and also Paul is very close to his parents, while Lu Ann hates hers, which is all the opposite these two need, because the #1 thing to know about someone is whether or not they hate their parents. Then we segue into some hottt Linksi sex talk, rawr!

Mr. Lodge is a master of psychological warfare; unable to prevent his daughter for dating the hated Archie, he’ll seek to dehumanize the poor lad by only referring to him as “it.”