When I saw the first panel of this strip, I thought, “Wow, it’s a representative of the Hootin’ Holler law enforcement apparatus who isn’t Sheriff Tait! You almost never see them!” Then in the second panel I realized why. Sheriff Tait may have come to some sort of modus vivendi with the violent criminals who inhabit his jurisdiction, but those scofflaws won’t hesitate to murder one of Tait’s employees in cold blood when he tries to do the basics of his job.

This wizened Viking chieftain may no longer be physically fit enough to join in on his murderous clan’s annual expeditions of rape and plunder, but he still has enough social standing to demand that the raiders bring him back the sex slaves that are his right.

I may be revealing my failure as a plugged-in consumer of popular culture here, but I’ve never actually seen the Saturday Night Live “More Cowbell” sketch. My understanding is that it involves Christopher Walken as a music producer, demanding more cowbell over the course of recording a song? I don’t really see how that relates to the scene here, which makes me suspect that the reference was a last-minute nonsensical substitution for the original text, in which this beady-eyed cat expressed its contempt for and violent intentions towards its sleeping family in terms that simply could not be published in a family newspaper. 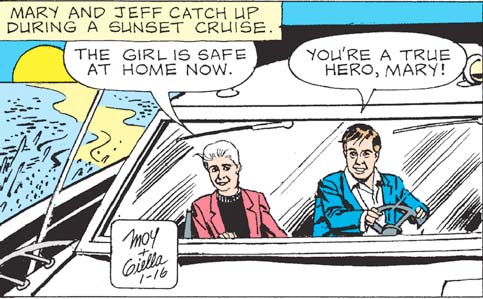 Oh, and hey, is Mary Worth using her recent kidnap-foiling to demand that everyone kiss her ass even harder than usual? You’d better believe it!