Oh, man, you didn’t expect this Mark Trail storyline to end without a powerhouse moral lesson, did you? “Rusty, America’s landscape is lousy with marijuana, and probably most of your little school friends are dopers! It’s not safe out there for anyone, so maybe it’s better that you just stay in the Lost Forest compound, forever. Those friendly beavers won’t try to push a reefer at you, I can promise you that!” 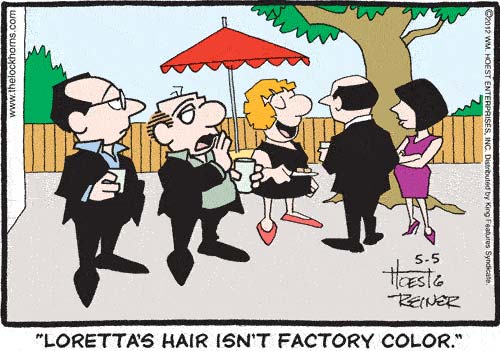 Don’t Leroy and Loretta usually at least try to make their hostile asides about one other relate in a vaguely punny way to whatever situation they find themselves in? Like, Leroy should be stage-whispering this to a salesman as they shop for a new car. Just blurting this stuff at a party reeks of even greater levels of desperation than we’ve seen before. “Loretta’s hair isn’t factory color. I mean, she dyes it. Her blonde hair is a lie. A lie like our marriage. Oh, God, I hate every waking moment. Do you have a gun in the house? Can you put it to my head and pull the trigger? I’ll pay you!”

Many of you may have already heard about the blockbuster Gay Teens Go To The Prom storyline Funky Winkerbean’s got lined up for the spring. I’m fully in favor of this because (a) I think gay teens should go to the prom together if they want and should be depicted as doing such in comics where proms happen and (b) any Funky Winkerbean strip time dedicated to gay teens going to the prom is strip time not dedicated to beloved characters dying in agony, leaving emotional devastation in their wake.

The mechanics of such stories are a bit tricky in comic strips like this, in that if you suddenly make an established character is gay it seems a bit deus ex machina just to make the plot happen, whereas if you suddenly introduce generic gay characters who only exist for the purpose of the storyline, it makes it very obviously an Issue Story rather than a story about the characters in your strip. Probably the best way to do it would be to introduce a new character who then becomes a part of the recurring cast (which is what Archie did), and who knows, maybe these two guys will stick around, though there are already so many Funkyverse teen characters that I can’t keep track of them all. Hopefully they’ll be given names at some point, at least.

But maybe they won’t! Because as the third panel reveals, the nemesis of gay teen happiness for the next several weeks will be Becky’s mom, who, if I’ve got my Funky history right, once launched a moral crusade to get Comic Book John’s comic book store shut down, because comic books are smut. Thus the important lesson that Gay Relationships Are Valid will probably just serve to make clear the real point of the storyline, which is that Becky’s Mom Is Terrible.

But maybe we won’t get to see any of this played out, because it turns out that the entire Funkyverse is really just a series of tales Grandma Rose is telling to her grandkids in order to scar them emotionally.