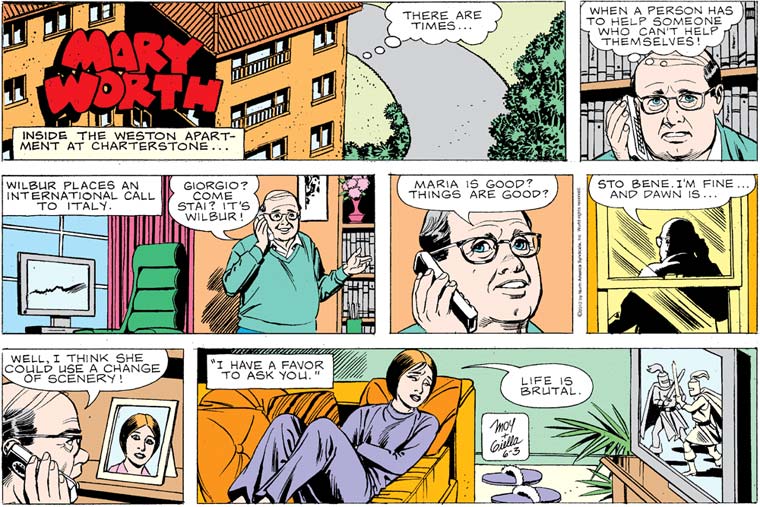 Well, this is an unexpected development! It seems that Wilbur is looking to get Dawn out of his few remaining hairs by shipping her off to … exotic Italy! With Giorgio, who sounds sexxay. And maybe married, but whatever, they do things differently over there, as I’ve been led to believe by Silvio Berlusconi. This seems like exactly what Dawn needs to pull her out of her funk.

And what a funk it is, as we reach day seven of Dawn lying on the couch and watching Game of Thrones and intermittently blurting out “Life is brutal.” Although with her eyes closed and neither hand properly visible, I’m tempted to guess that she’s actually engaging in a little self-pleasure right there in the living room, which, good for her in general, but not bothering to get out of home spaces Wilbur might at any moment occupy may be a symptom of larger problems. And it isn’t even during one of the show’s many sex scenes! (I’ve never watched it, but I’m given to understand that you see balls and/or boobies about once every 45 seconds.) Also, if “Life is brutal” is what she says while orgasming, we may have an explanation for why her relationships all seem to end so abruptly.

Little Face has been nice enough to spy on his evil crime gang for Dick and the cops, so you’d think that they’d have him wear a wire in the traditional sense of wearing one concealed under his clothes, rather than giving him a clunky old two-way wrist TV that’s totally visible and emits glowing electrical arcs to boot.

You heard it here first, parents: spend too much time on the computer and your child will go catch whatever diseases you get from splashing around in bird shit.