You have to hand it to today’s Rex Morgan. It faced a difficult test — “Can we depict a drunken younger woman, dressed in fairly modest mourning clothes, strangling an old lady, but at the same time remind our readers that younger one has large, shapely breasts?” — and passed with flying colors.

Desperate to change Nina’s mindset and put a stop to her irrational fear of childbirth, Tommie has come up with a new religion based around worship of Nina’s unborn child, with Tommie as the high priestess.

Sam is staring at that signed contract with more affection in his eyes than he’s ever show to his wife, children, or any other human being. I know this is supposed to be a “realistic” strip, but shouldn’t he really have dollar signs floating around his head? 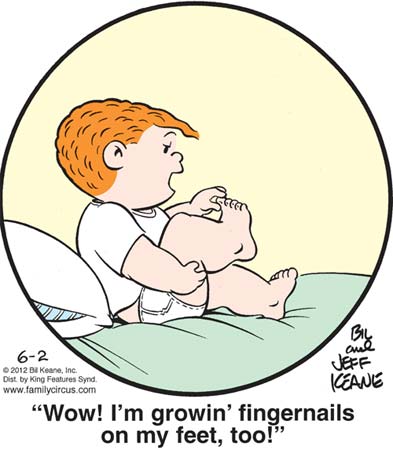 If the Family Circus suddenly became a body horror comic, with the Keane Kids cracking wise as fingers grew out of their feet and their ears dripped blood and their hair fell out and the back of their heads were covered with eyeballs, would that be more or less disturbing than the jokes they use now? Discuss.