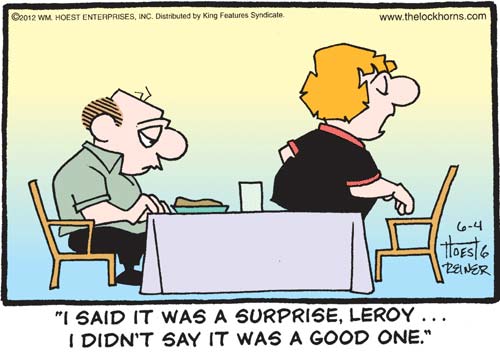 I guess the “surprise” is supposed to be whatever the brownish glop on Leroy’s plate is, but since every Lockhorns meal involves earth-tone glop of some sort, and since Loretta hasn’t served herself anything, maybe something more momentous has happened. After all, despite endless decades of marital combat and mutual loathing, what could be more surprising than one partner in this hell-union finally announcing that he or she was leaving? It’s always seemed that they can’t imagine a life beyond their endless, claustrophobic war, and so if Loretta really is about to grab her bag and walk out forever, it would explain why Leroy is looking even more slumped over and crumple-faced that usual. After all these years, what will he do? Will he have the capacity to do anything other than stare at the brown glop for hours, as it congeals?

My experience with Broadway theaters is fairly limited, but they’re mostly older buildings and often surprisingly small and cramped. So, kudos to the owners of this theater for retrofitting it so well for handicap accessibility that Clown-9 can drive his duckhead-car (which isn’t exactly large but is still significantly bigger than, say, a Rascal mobility scooter) off the street, through the doors, and right up the aisle! Meanwhile, anti-kudos go to the artist of this strip, who apparently realized that they forgot to make Peter visible in panel two and decided “Enh, we’ll just put his face in a weird little circle thought-bubbling out of nowhere.”

You better watch yourself there, mister, because littering in America’s majestic wilderness and murder aren’t that far apart in Mark’s moral code! Note in panel one that Mark has a firm grip on his belt — it’s the only way he can stop himself from punching this guy a time or three right now.

Looks like Herb’s mother-in-law has been spending some time with her favorite book, Incredibly Bland Aphorisms From History’s Insanest Philosophers.