Just a bit longer than 24 hours to pre-order my novel through Kickstarter! Thanks to all for your generous support so far!

Ditto’s look of complete and never-explained horror in panel two is utterly delightful to me. What do you suppose he’s looking at, just off-panel, that’s clearly causing him to rethink everything he believes about what goes on in his house when he’s asleep? Is Chip putting his final touches on his very own meth lab? Is Lois in the midst of a full-on orgy with folks from the local swinger’s club, a duty that Hi, tired from a long day at work, has begged out of so he can just read his newspaper? Has Dot been allowed to stay up and watch all the cool TV shows after her twin has been ordered to bed?

Speaking of delightful, I am delighted by today’s awesome “Life is brutal” callback, as Wilbur has been forced by events to acknowledge that all his attempts to cheer up Dawn have been disastrously counterproductive. If only he had acknowledged life’s brutality and just stayed home and watched TV with his mopey daughter! As it is, looks like he’ll have to engage in a little half-hearted fisticuffs for lifeboat space, for form’s sake, before his inevitable drowning.

The assembled moviegoers are right to be horrified by the conclusion of this film. “The End” in Chicago font? What the hell is this, 1992? 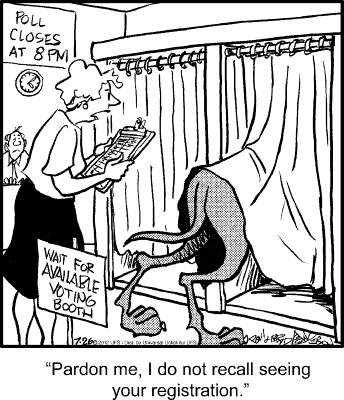 Marmaduke hopes that, by exposing democracy as a sham, he can accelerate humanity’s decision to accept him as our eternal undead demon monster king.