Everyone: just wanted to offer a huge thanks to those who participated in my novel’s Kickstarter campaign, and those who helped spread the word. I have been humbled by everyone’s support and I promise to present you the best novel I can, in a year or so! 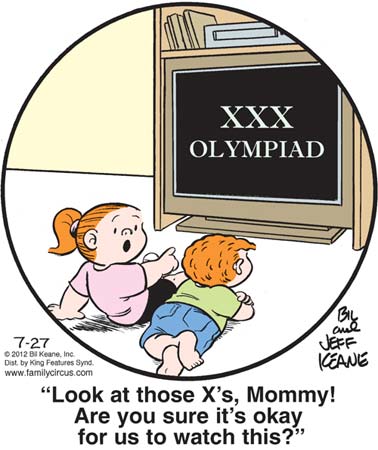 I hope I am not breaking any hearts or spirits when I tell you that the Family Circus, like many legacy comics, is pieced together from a huge library of clip art that is modified to the extent necessary and usually no further. At least we know that today’s panel features a genuinely new joke, both because today really is the opening of the 30th Olympiad and because only in today’s fallen, degraded society would the squeaky-clean Keane Kids even know that “XXX” denotes morally repugnant grown-up kissing without baby-making. Still, the TV in today’s panel is kind of interesting to me, as it’s not the usual Carter-era console set, but instead appears to be a flatscreen sitting directly on the floor, which … I don’t think is how anyone actually watches a flatscreen? Especially kind of a small one, like this? Which makes me think that this is just a modified version of an older drawing where a weird brown flatscreen has replaced the traditionally faux-wood-paneled console set. Although who knows, maybe this little TV-on-the-floor is specifically for Jeffy and Dolly (they’re not allowed on the furniture, for OBVIOUS REASONS) and the fact that they have access to such things explains why they now suddenly know that sin exists.

I really don’t have much to say about it, but I am in awe that this Gasoline Alley faulty DVD player storyline continues against all odds to exist, as it has gone on forever and nothing keeps on happening. Now they’re openly acknowledging that they’re repeating jokes! At least I assume that the referenced joke actually appeared in the strip in another go-round of this endless scenario. My memories of the details are vanishing into time’s mists.

Honest question: Are there people who just assume that any amputee in street clothes is a war hero? What if they lost an arm doing something stupid (e.g., playing with dynamite) or evil (e.g., tried to strangle an orphan, had stranglin’ arm chopped off by an actual hero with a machete)?

Every Mary Worth of course takes place in a baffling dreamscape of non-Euclidean spatial relations, but I’m pretty confused about what we’re looking at in panel two. Normally a cruise ship’s deck wouldn’t be that close to the water, right? Is the boat tipping over, and the fellow in red isn’t so much leaping with unnatural strength to safety as tumbling out into space? Or is it sinking straight down, with the lower decks already swamped and the water quickly rising up to reach our heroes? Either way, I admit it’s a bit churlish to question anything about a Mary Worth panel that features a crazed man in a bow-tie screaming “It’s the only option!” as he points to the churning waters of the Mediterranean. But such is the critic’s curse!

Hey, remember when Lu Ann found out that the woman she always thought was her cousin was really her mother, and suddenly realized why the couple who raised her and her sister were always so bitter and distant, and went off to South Dakota to confront them all and sort out the emotional consequences of this elaborate web of deceit? That all sounds like it would have made for compelling drama! I guess we’ll never know now, though.