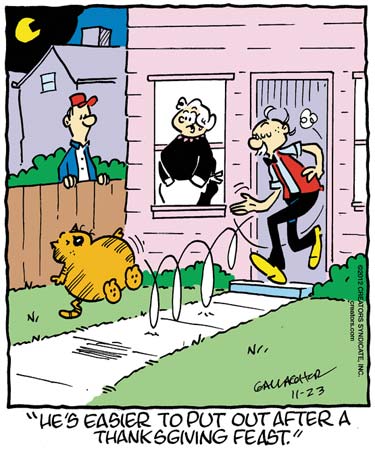 Newspaper comics are an incredibly conservative art form — not in a political sense, necessarily, but in the sense that visual signifiers and little building blocks of jokes that haven’t existed in the real world for literally years are still just taken for granted in comics, because they’ve become established running gags during the strips’ decades-long run. Take, for instance, the idea that you’d put your cat or dog out at night. This was, I guess, an unremarkable aspect of pet ownership at one point; but today, anyone living in an urban or suburban area would be judged rather harshly if they just let the dog roam free at night, and while plenty of people do have indoor-outdoor cats, even in the city, plenty don’t, and those that do almost never actively kick the cat out at night. This change in attitude happened long enough ago that, when I was a child in the early ’80s, I had to have my mom explain to me why Fred Flintstone dropped Dino on his front step in the opening sequence of the Flintstones; yet here we are 30 years later, and Heathcliff is still being comically bounced across the lawn, and Dagwood’s suburban cul de sac is haunted by packs of feral dogs at night.

Meanwhile, newspaper comics are apparently forbidden to use the word “hell,” even when it’s the name of a place of afterlife punishment rather than a curse word. There are probably plenty of other perfectly understandable substitutes that could have been used instead (“Hades,” “The underworld”, etc.), but heck, let’s go with “heck,” a euphemism for the swear word that’s never, ever used to refer to hell-as-a-place, just to confuse and irritate everybody.

Haha, wait, what? Greg is the new James Bond? Is he even English? Is he even attractive? Wouldn’t he be able to afford a better apartment than a third-floor walkup in a building where teachers and nurses live? I guess this does at least explain why Margo hasn’t been putting any effort into publicity, because having the new Bond in your stable of clients is probably a license to print money, assuming that the film doesn’t flop because it turns out its new star is a bland American who goes around wearing sky-blue turtlenecks.

Meanwhile, Skyler is the victim of a abrupt hair color shift, but as a young Hollywood starlet this is actually one of the more realistic instances of this typically A3Gian blip.

Gil Thorp’s storyline continues to be not even interesting enough for me to bother summarizing for you, but in the interest in keeping you up to date on what’s really important, here is a sexy closeup on Gil’s sweaty face!