Mark’s remarkably non-traumatizing kidnap idyl is still continuing apace, as the good people of Not Guerilla Island prepare to make a scurmptious feast from the fish Mark and Pop caught, and … say, what’s the story with that little guy in the white shirt in the second panel?

OH FOR THE LOVE OF GOD WHAT’S GOING ON WITH HIS TONGUE? It’s not … human. Sure, you could try to claim that it’s just a weird little semi-circle crudely drawn onto a pre-existing clip art face, but I think the safe bet is that this child is an alien lizard-man wearing a meat-sack disguise, just like everyone else on the island, and once they get enough ransom money to repair their spacecraft, they’ll swarm all over Mark and Andy, their razor-sharp teeth tearing away all their flesh in minutes, leaving bleached skeletons behind.

I’m not sure how we’re supposed to parse the politics here — are we intended to be patriotically enraged by cheap Chinese labor, or are the industrious low-wage workers of Shenzhen’s factories supposed to compare favorably to the smug American repairman? I do know that this is a strip that has never exactly focused on little visual details, which makes the lovingly rendered stitching on the repairman’s visible underpants all the more unsettling. 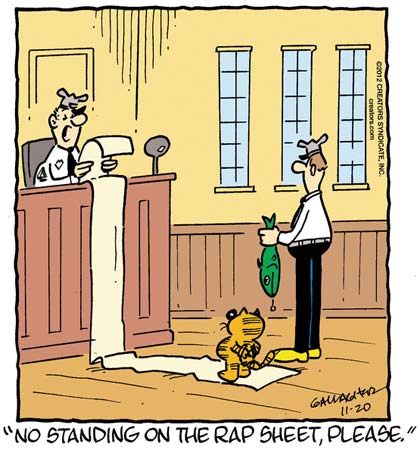 I’m certainly not opposed to Heathcliff being called to account for his many crimes in a court of law, but I do have some questions about the fish that the guy next to him is holding. Specifically: what’s the deal with the fish? Is it evidence in one of the many cases about to be tried simultaneously? Is it bait? Was Heathcliff, the master criminal, lured into the Man’s courtroom by some guy waving a delicious, pungent dead fish around? Because that would be kind of disappointing.

Here are some characters in Gasoline Alley! I guess you’re supposed to like them, even though their black, beady, inhuman eyes are the stuff of your most terrifying nightmares.