I am super excited about being back in the saddle for Thanksgiving Week! What was once a celebration of getting through the year without starving to death has become another opportunity for America to indulge its bottomless appetites, so what better way to get psyched for it than to contemplate Sarge’s insatiable needs, for food, for love for … something. Attracted by the odor of the garbage that’s all over Beetle’s clothing, he waltzes into the kitchen in a fugue state, his eyes closed, his arms ready to hug, or maybe wrap around his prey and hold it down so it can be consumed.

Sadder, unsurprisingly, is Funky Winkerbean’s annual Turkey Sale. There used to be a certain manic joy to the Westview band’s attempt to stave off bankruptcy by selling possibly non-USDA-inspected turkeys to unsuspecting saps door-to-door. A cartoonist who starts off writing strips when he’s young generally has young viewpoint characters; if he’s lucky enough to have a job for decades, of course, the viewpoint characters get old and the new young people who get introduced into the cast are feckless morons. And so the current generation of turkey salesmanship is represented by Peruvian Hat Boy here, who wanders dumbly from door to door, mumbling out half-hearted pitches memorized by rote like those dead-eyed children you see on the subway selling boxes of M&M for “school.” I suppose it’s possible that he just had his will to live crushed out of him by endless lectures about the importance of sequential art.

Even grimmer is today’s B.C. Ha ha, this turkey has scavenged through the garbage to find the severed leg of one of its kin, and has now crudely attached the dismembered limb to his own chest in order to convince the world that he’s a genetic abomination, because he’s terrified of being killed and eaten!

In non-horror news, Miss Grundy is sad that her students don’t know who Savonarola is, which might be more troubling if she were teaching a class about, say, the history of Renaissance Italy in general, or maybe precursors to the Reformation? Because while Savonarola is the subject of a moderately famous painting by Fra Bartolomeo, he was more of a political-religious figure than anything to do with art. On the other hand, kudos to The Savannah Roller, who’s definitely selected one of roller derby’s more obscure pun-names. 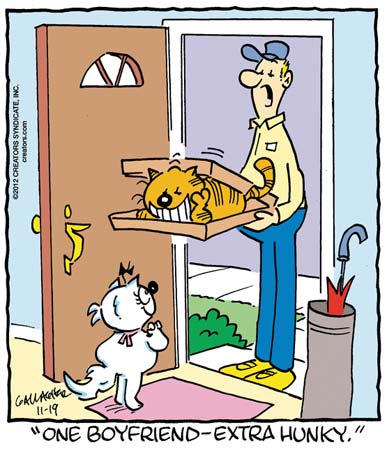 Heathcliff and his girlfriend, who enjoy elaborate role-play, have hired a bored pizza delivery man to “deliver” Heathcliff, for sex. You can tell the pun fills him with contempt, but work is work.