Hey, it’s the Comics Curmudgeon Fall Fundraiser — thanks for your generosity!

The Revenge of the Men for Margo’s many unspeakable crimes is here revealed as a one-two punch. Even as Evan the Earnest Mole conspires with his Aunt Cathy to bankrupt Margo’s publicity agency, Greg the Arrogant Actor plans to fatten her up on that mountain of generic Thai food. Soon, Margo will have no economic incentive to leave her apartment, and will be too wide to do so anyway — making the world a safer place for interchangeable men, but placing Lu Ann and Tommie in a world of hurt.

Did you wonder why Mark was so blasé about his kidnapping and island imprisonment? Well, panels two and three reveal that Mark can see into the future, accepting compliments before they are given, and doubtless foreseeing the hail of fists by which he will eventually secure his freedom. It’s a miracle anybody can sneak up behind this guy. I guess the ability to predict the future doesn’t mean you have to be paying attention.

June got free clams and Rex got Internet fame, but Ginger wins the chest-off.

OK, it’s been hinted at that Jim is a possessive creep, but established beyond any doubt that he has ONLY ONE ARM. So how exactly is he grabbing Dawn in panel 2? And just what the HELL is he doing with his bottle of soda? I think the answers demand a much larger exclamation point than Dawn is giving us here. 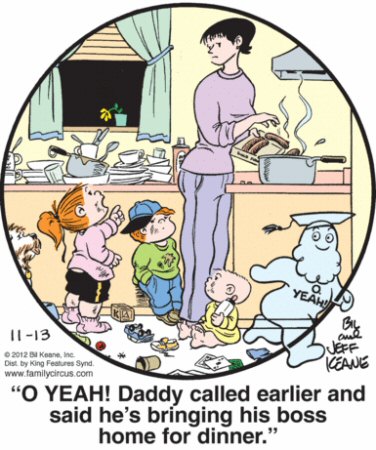 The original Family Circus gremlins, Not Me, Ida Know, and Nobody, are invisible scapegoats for the Keane Kids’ adorable transgressions. But newcomers Just B. Cause and O. Yeah aren’t objects of blame at all, but oddly-attired “things kids say when they’re being jerks.” If they live long enough to reach middle school, we can expect the Kids to give us strung-out junkie Whatevs, Vegas card-shark Deal With It, and the principal character from Marvin, O. Crap.

Hey, Thel — that kitchen is a pigsty. And hot dogs for dinner again? Seriously, woman, just what the hell do you do all day?