Hey, teens, I bet you think that it’s “cool” to drink alcohol! Well, your pal Frosty is pretty hip and extreme with his backwards baseball cap and such, and he thought it would be OK to get drunk like a grown-up, and look what happened: he tore his own body apart and hurled it in gory chunks at his enemies, who presumably ran away in gibbering terror. This is what’ll happen to you if you let bad kids give you a hard lemonade at a party. Just ask for a Mountain Dew instead! You’ll thank us later!

The Sad Tale of Dawn’s Sadness that just concluded began way back in May, so obviously we need something wacky to cleanse our palate in its wake. But even longtime Mary Worth trufans such as myself could never have predicted how wacky things would get. Mary coaching an amateur cake designer to victory in the face of smug, sneering professionals, all in an attempt to cash in on the cake decorating TV craze of four years ago? Mary finally getting to see her many rambling philosophical diatribes transformed into pastry dioramas, wowing the world with her wisdom? YES PLEASE. 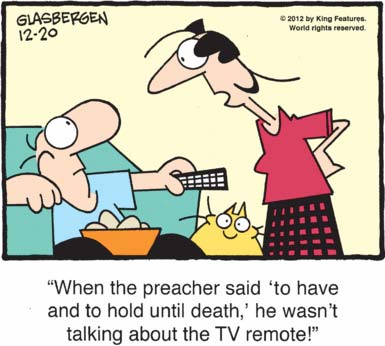 Whatever, Stanley is just going to keep on doing weird sex stuff with that remote, and he doesn’t need God or society’s approval, man.