As usual, I haven’t been keeping you up on Gasoline Alley’s desultory antics, so let me just do so now very quickly: li’l Boog has been persecuted by bullies, including one nicknamed “Bear,” and they lured him out to the woods to beat the crap out of him, but then an actual bear showed up, and now we get to today where, it is revealed, Boog speaks the secret language of bears, and can command them to do his bidding. Did he learn the ursine tongue when his neglectful grandfather let a bear carry him off, years ago? Probably! But rather than satisfyingly going all 2 Kings 2:23-25 on these kids, Boog the Bearomancer just urges this vicious grizzly to make nice with his “friends”, who have been nothing but mean to him. Unless a crippling sense of shame is a crueler punishment than bloody dismemberment?

Do I have an unreasoning hatred of Newspaper Spider-Man? Maaayyyybe. I was all set to go on an unhinged rant about this strip’s dastardly use of “heist” as a transitive verb — a usage I had never heard before — but fortunately I looked it up first. Turns out the use of the word as a verb actually predated its use as a noun, by about 10 years! It’s a variation of “hoist,” and was first used as a slang term for shoplifting in the 1920s. So even the world’s crappiest superhero comic can still teach me things about etymologies, which are among my favorite bits of language trivia. Thanks, Newspaper Spider-Man! 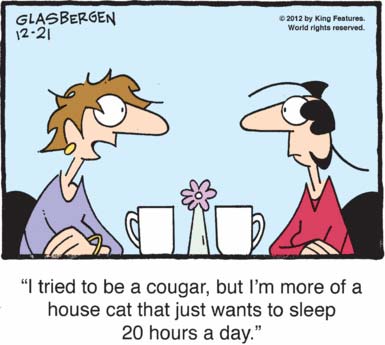 Harriet’s friend is way too sleepy for sex.

Having trouble getting into the Christmas spirit? Here’s a cartoon about Santa having trouble not pooping his pants!