Funky Winkerbean Is The Most Depressing Long-Form Work Of Art Ever Created, Chapter 923: two happily married young people with no major current traumas (though plenty of traumas lurking in their past, obviously, not all of which I can remember right now, why is there not a specialized wiki online with articles for each Funkyverse character explaining the specific awfulness they’ve suffered) are having a pleasant evening at home, and express contentment, but that contentment is tempered by an overwhelming sense that any fleeting moment of happiness will immediately be destroyed by the hateful God of Sadness who rules over all. It’s a recurring theme in this strip! And lo, it has come true in panel three, with … a call from Darrin’s mother? Isn’t Darrin’s mother (his mother who adopted him as an infant, not his biological mother, who was LISA who DIED OF CANCER very soon after she and Darrin reconnected with one another) the nice lady who helped coach the girl’s basketball team last year? Why would they fear a phone call from her? Well, I’m sure there will be reasons. Terribly and arbitrarily depressing reasons. Get ready for a dramatic roller-coaster ride this week! (Is it still a roller-coaster ride when you only go down?) 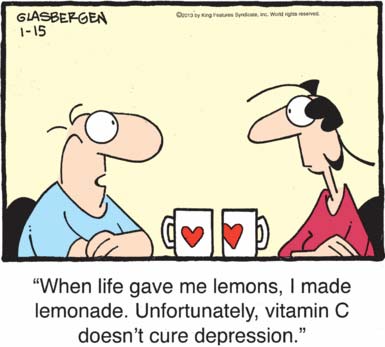 In contrast, this shockingly frank panel is almost hopeful. Mental illness cannot be cured by mere aphorisms! Seek help from a licensed professional!

AT LAST, THE DRAMATIC CONFLICT IN MARY WORTH! Mary has been asked to help John design his cakes for his entry in the contest, but John is maybe deciding he’d rather do it on his own and will try passive-aggressively to extricate himself from Mary’s mentorship! Will their pairing end amicably, or will it be mildly socially awkward? Don’t miss a single panel of pulse-pounding action, be sure to order home delivery of every newspaper you can, just in case one gets lost! 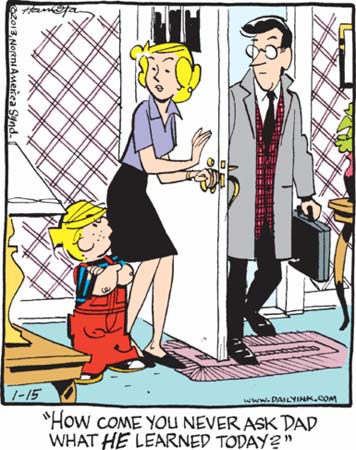 Dad’s job is soul-killing grind, where he neither learns anything nor grows professionally.