YES! Mary and John have overcome almost no adversity whatsoever to TRIUMPH in their cake battle against other cake bakers! And they did so by working as a team, by joining together as one, by functioning almost as a single organism, by … oh my God .. panel one … MARY’S ARM IS JOINING INTO JOHN’S ARM OH MY GOD OH MY GOD THEY ARE MELDING INTO A SINGLE BEING. That look Mary’s giving him in panel two, it’s like, “Yes, John, soon I will be you.”

Say, what’s going in Gil Thorp? Oh, you know, Scott is having a great season because of his magical peacock but he doesn’t want to share it with the other guys because it might be the reincarnation of his dead little brother blah blah blah BORING. More interesting to me is today’s revelation that the Mudlarks are beginning to transition to full-body fishnet-stocking uniforms. 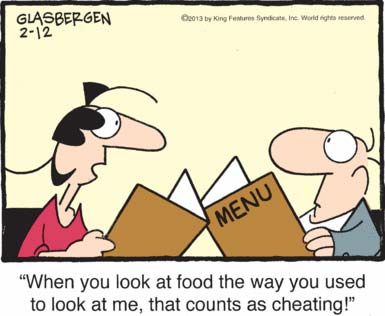 Stanley may be too lazy to woo other women, but he can still fuck his food, I guess. It’s just lying right there on the plate in front of him!

Yep, this seems like an appropriate reaction to an offer of help from Newspaper Spider-Man!