Ha ha! It’s funny because … OK, you know what, I have literally no idea why this is funny. It’s funny because Blondie feels a need to project a facade of false confidence to her husband, but with her best friend and business partner she can stare the harsh truth in the face, the better to overcome adversity? Or, wait wait, is it funny because Blondie said “Kick it up a notch,” which is the catchphrase of popular television cook/pop culture personality Emeril Legasse? That would be much more depressing, to be completely honest. 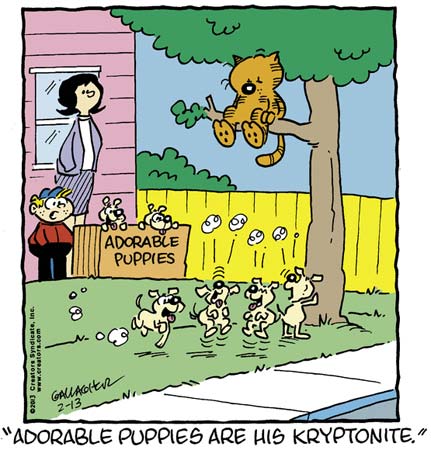 Now, it’s been a while since I’ve read any Superman comics, but as far as I can remember he reacted to the presence of kryptonite by grimacing in pain as the life force was sucked out of his body, not by regarding it with heavy-lidded ennui while sitting a few feet away from it. Is Superman too cool to writhe in agony when exposed to kryptonite now? Are there any superheroes left who aren’t too cool for stuff anymore?

I guess there’s always Spider-Man, who’s not too cool for anything. “Something’s wrong! I’ve got to find out what it is! Are my sneakers not the right brand? Do I not listen to the right music? Are my friends lame? God as my witness, I will figure out why Daredevil doesn’t want to hang out with me!”

Say, were you wondering what’s up with Rufus and Joel’s dialectical antics in Gasoline Alley? Well, it seems that Rufus has decided to marry his mule Becky! Don’t worry, though, it’s just a trick to fulfill the requirements of a will so he can get some money, it’s not a sick sex thing. This is as funny/horrifying as Gasoline Alley will be for some time, so feel free to continue ignoring it. 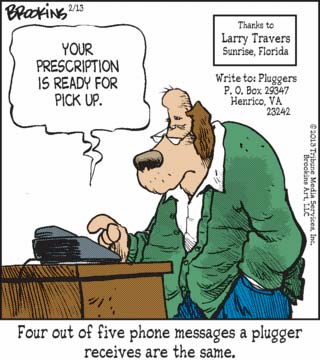 Pluggers may not have many friends, but they sure are on a whole lot of pills.