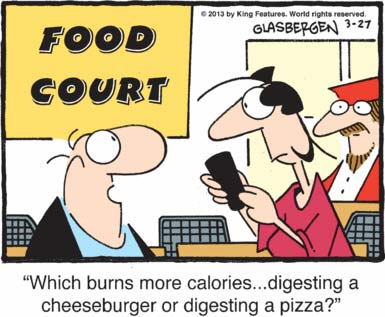 Seeing “FOOD COURT” in big letters like this gave me a brainstorm for a hit new reality show, Food Court, in which an ersatz jurist in a black robe would preside over faux trials in which, say, snacks that claim to be “healthy” would be cross-examined by medical experts who would prove that their sodium levels were off the charts and nutritive value was essentially nil. But then I saw the guy in the background in the vaguely Renaissance outfit, and I imagined Food Court, a historical comedy-drama in which a 15th century Italian prince rules over a Italian statelet and spends his time mediating the sometimes violent battles between rival restauranteurs. These ruminations were fairly inane, admittedly, but surely no worse than whatever Stanley is babbling about. Harriet is right to ignore him and look at whatever fun thing is on her phone instead.

Haha, I love how quickly Margo has gone from caffeinated semi-enthusiasm to heavy-lidded ennui. “So, this is about money? You want me to write you a check? If I get my checkbook out, that will shut you up about whatever do-gooder nonsense you’re on about, and I get to eat breakfast in peace?”

“We’ll both have the salmon with a caesar salad, Rudy … I’m buying, which means I get to make all the decisions! I’ll thank you not to address Mr. Driver by name or look directly at him for the duration of this meal. All lunch-related queries go through me, the paymaster.”