We make fun of Newspaper Spider-Man as a character here a lot, and for entirely justified reasons. But we must save some pity for the other characters exiled to the Newspaper Spider-Man universe as well! Take for instance the Kingpin, whose main villainous super-characteristic seems to be his bulk. In a fair comic-book universe, he might be expected to display his displeasure by, say, theatrically bending an iron bar in half or something; instead, he’s reduced to busting up his entirely ordinary white-collar workstation. Tune in tomorrow when Ted King, assistant director of the accounts receivables department, must sheepishly ask IT for a new keyboard!

I think we can say with a certain degree of confidence that Nice But Nervous-Looking Lady Moving Into 3E will end up helping Tom Harpman forget his ex-wife and love again, despite the arbitrary disapproval of Mean-Faced Old Lady Also Moving Into 3E Who Is Probably Nice But Nervous-Looking Lady’s Mother. Still, I think it would be great if this were an entirely new storyline, and the Tale of Tom Harpman were at nine days the shortest Mary Worth plot on record. “Turns out the guy keeps to himself because he’s sad and divorced. Likes soup, though. Let’s never talk about him again. So, how about Apartment 3E, right?”

I have significantly less tolerance for dwelling on Edge City’s obsessive neurotic antics than Uncle Lumpy does, but I do admit a certain queasy fascination with seeing how explicit this “the characters explore B&D” storyline will get, so, here you go: obsessive neurotic Abby Ardin tops from the bottom. 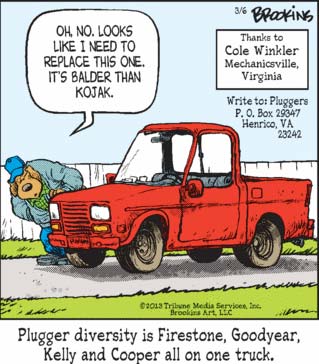 Plugger diversity is when a bunch of different brands of tires are owned by white people.