The funny thing here is that Dagwood seems to genuinely believe that it’s “weird” that he liked this repulsive-sounding concoction, as if he were not an infinite appetite, a bottomless maw with a thin layer of human meat wrapped around it. But somehow it’s necessary that he remain un-self-aware on this point. “Gosh, this is kind of good!” he says as he pours the latest combination of barely digestible garbage down his gullet, just like he said all the other times with all the other combinations. 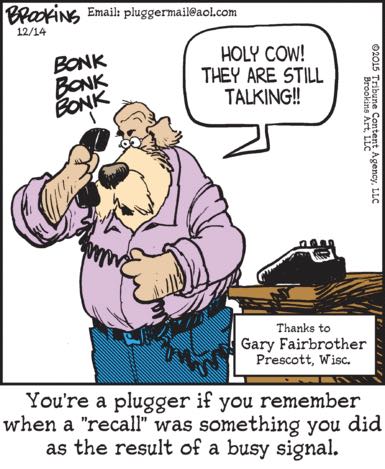 I’m not going to lie to you: this panel terrifies me. The typical structure of this particular Pluggers subgenre goes something like this: “Pluggers remember when [word in common use] meant [former primary definition, which has now been superseded]!” The difference today is that I have no idea what other meaning of “recall” they might be contrasting this with. Like, obviously nobody actually ever used “recall” in the sense depicted here, but are we meant to understand that there’s some … higher tech definition now in use? Like with the computers and such? Smartphones? Snapchat? Is this a Snapchat thing? Oh, God, has my persistent refusal to learn more than the bare minimum about Snapchat turned me into a plugger?

Oh come on, Heather, next to Sarah and her grotesquely spherical head, lots of babies would look beautiful. Pretty much anything would, thanks to the contrast. Crumbling factories, dead animals, you name it, it all looks good next to Sarah.

Well, so, Francis seems to be identified correctly again, but, uh, that is still very much his sister MaryLou, who may be role-playing as “Cindi” or whatever, but this is all very gross and disturbing.

So I don’t talk about Edge City and its obsessive-neurotic antics much, but despite my distaste for its occasional exploration of alternative sexual practices, I’ve come to kind of enjoy it. Which makes it too bad that the strip’s creators recently announced that it was ending at the end of the year, in a melancholy blog post in which they said the syndicate didn’t want it anymore, they were tired of writing and drawing it, and nobody reads newspaper comics these days anyway. But at least, unlike Apartment 3-G, they’re giving their characters a send-off with a little closure and dignity, although “dignity” may be too strong a word for when Colin becomes a millionaire YouTube sensation and the whole family has to move in to a garish Hollywood Hills mansion and pretend to like all the asinine Vine stars he suddenly starts hanging around with.

Ha ha, is Biz having a stroke or just really drunk? He can’t tell! Just another good-natured laff from the hilarious bird-men of Shoe, ladies and gentlemen.

GOD DAMN IT A “SELFIE” IS A PHOTOGRAPHIC SELF-PORTRAIT, IT DOESN’T MATTER WHETHER THEY’RE DIGITAL OR FILM OR WHAT

Say there, Crock Narration Box, I believe this is your very first appearance — congratulations, and welcome to the comics page! I hope you won’t mind a little constructive criticism from a long-time fan of Narration-Box classics like Phantom (“In the Bandar tongue!”), Apartment 3-G (“On the street, at the Tribeca Grill or maybe in their apartment …”) and — the Shakespeare of Narration Boxes — Amazing Spider-Man (Irony, anyone?“):

Like Hi Flagston, Greg Wilkins, Frank DeGroot, and other stuck-in-time comics Dads, Len Ardin poses as a Gen-Xer, but his choice of music outs him as a Boomer. His music and, of course, his grotesquely swollen prostate.

Descending into madness, billionaire Howard Hughes grew obsessed with the spy drama Ice Station Zebra, watching it over and over. Here, Rose obsessively watches two Irish guys slug it out in a coal mine, scouring every scene for hidden clues that will help her make sense of her petty, vicious, empty life. She’s thaaaaat close to insight, she just knows it — but the answers just slip away every time. Of course it upsets her stomach — have a little compassion for the crazy old bat, you jerk. And take that damn hat off in the house.

Hi, everybody! I’m filling in until the 28th while Josh visits family and friends back East. Reach me at uncle.lumpy@comcast.net if the site gives you any trouble. Enjoy!