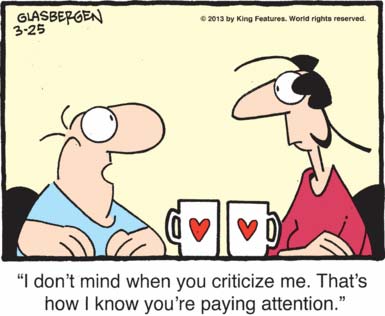 Hello, and welcome to this journey I’m on, which is called “Josh learns that the Better Half is so, so much more harrowing than the Lockhorns will ever be.” Remember: Leroy doesn’t mind when Loretta criticizes him because he’s a loveless shell of a man who can’t feel emotions anymore. Stanley doesn’t mind when Harriet criticizes him because he desperately craves her attention, and he may not know how to fix the sad dysfunction that his marriage has become, but he at least knows that if he screws up Harriet will acknowledge his existence, and maybe even make eye contact with him and oh my God I’m crying right now pretty much.

There was a minute where I thought this was one of those things where the antagonist and protagonist have a stand-off and they both know a secret and they each know the other knows, but everyone pretends not to know, to heighten dramatic tension. Then I remembered that Mark and Rod Bassy were both extremely dumb and also Mark Trail doesn’t really do dramatic tension, so I guess Rod thinks he’s being pretty slick here. Remember, Rod thinks that blurting out “Are you saying that I’m doing something illegal” with no provocation is “slick,” so it makes sense that his instinct is to totally downplay a child being missing for … hours? days? Who even knows at this point. You know, kids today, so lazy that they just wander off away from their families, just going somewhere to be lazy and also have no way of acquiring food and shelter, amiright?

By the way, Kopi Luwak is so expensive and famous because it’s been pooped out by civets. So I guess kudos to Herb and Jamaal for not going for the poop joke, though also I guess this joke isn’t very funny, so, I dunno, maybe we should’ve tried out a poop joke and seen how it went.

“I mean, how could a lawyer help defeat a villain with no superpowers who runs a large criminal organization? It makes no sense!”

Haha, that Crankshaft, he sure literally sucks the joy out of the life of everyone he knows!