Rex and June may have forever left the land of magical stripper fights behind them, but there’s still the embryonic Morgan-spawn gestating in her womb, which I guess will be the fulcrum of however many Rex Morgan plots make up seven or eight months of strip time. Today’s fun: did you know that ladies who are pregnant crave certain foods, like waffles, even when, as we learned yesterday, the only waffle mix in the house expired more than a year ago? June is completely mesmerized by this ancient box of not-quite-shelf-stable-enough powdered breakfast, which should have hilarious results as she attends this afternoon’s lecture. (“Picking up on these subtle indicators could help medical professionals intervene in a domestic violence situation before it becomes deadly, and … yes, Nurse Morgan? Do you have a question?” [CUT TO: JUNE SITTING IN BACK ROW, HER FACE COVERED IN RANCID WAFFLE MIX, EYES WILD LIKE THE COCAINE-CRAZED TONY MONTONA IN SCARFACE])

Ever since Funky Winkerbean began its Turn To Serious Art And By Serious Art We Mean Disease And Addiction And Death, it’s often featured multi-day or even multi-week story arcs. This week, though, the strip has returned to its gag-a-day, high-school-antics roots. For instance, today’s strip, in which Les is a smug dick to his entire class for no reason, has no larger narrative context, but is just sort of a discrete lump of unpleasantness. 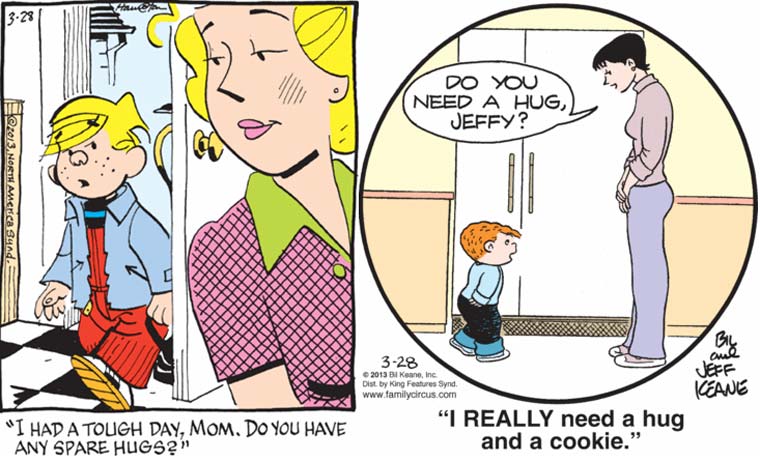 Wow, Dennis, you got outmenaced by Jeffy. I think you need to take a long, hard look at yourself.