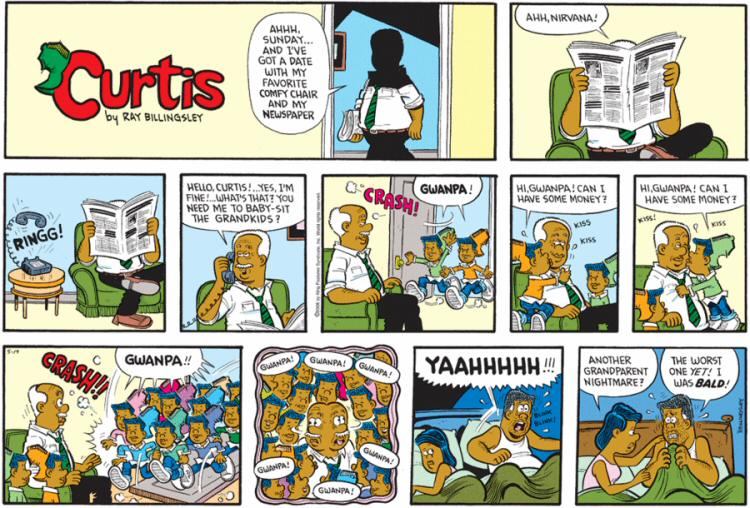 I confess that baby-talk drives me nuts, even when spoken by parents to children or by actual babies — don’t get me started on adults using it with one another. I stay away from the otherwise appealing Mutts to avoid that damn lishping cat, or dog, I don’t know, I don’t care, I won’t look. So “Gwanpa” here really sets my teeth on edge. It’s not even good baby talk with that awkward N-to-P transition, and it neglects fine alternatives like Grampa or Pop-Pop that children actually use and would work really well here. Repeating the offense six times in panel nine just twists the knife.

But credit Curtis for unleashing a terrifying hallucinatory vision on a par with Funky Winkerbean‘s Rust Belt hellscape. Who wouldn’t bolt screaming from hundreds of Curtises (Curtes? Curtides?) invading your home and swarming your comfy chair, wormlike Curtid fingers rifling through your pockets for money and smokes to the pounding rhythms of “rap” music? Why are there so many, all the same age? What do their hat colors mean? And not least, how did Curtis père ever convince some poor girl to mate with him, possibly more than once? Because if that’s the kind of world we live in, I’m pulling my wool cap down over my shiny pate and going right back to bed, nightmares or no. 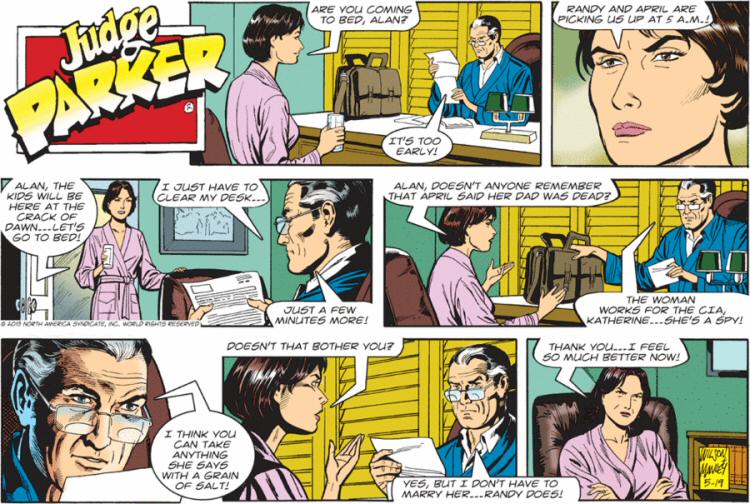 I confess I didn’t expect Judge Parker to be so fastidious in maintaining continuity. In a strip that drips out plot points like bitumen, it would be easy to dump details like the elder Parkers’ marital frictions or April’s dead Dad down the oubliette, trusting that only a handful of lunatic obsessives would ever call them on it. But courtesy of Katherine’s suspicious nature and acid tongue, here they are front and center.

Early “tomorrow”, half of the Parker-Driver universe will set sail for Randy’s and April’s Acapulco crowd-nuptial, leaving the other half at Spencer Farms to grapple with Neddy’s Ross-Thalia Niger kidnapping con. How delightful would it be if April’s shadowy dad is alive and running the kidnapping ring/con game from his seat at the rehearsal dinner? Both plots could then collapse on one another in a melee of shouted accusations, tearing hair, and gunfire, from which the Parker-Drivers would somehow emerge carrying huge bags of cash. 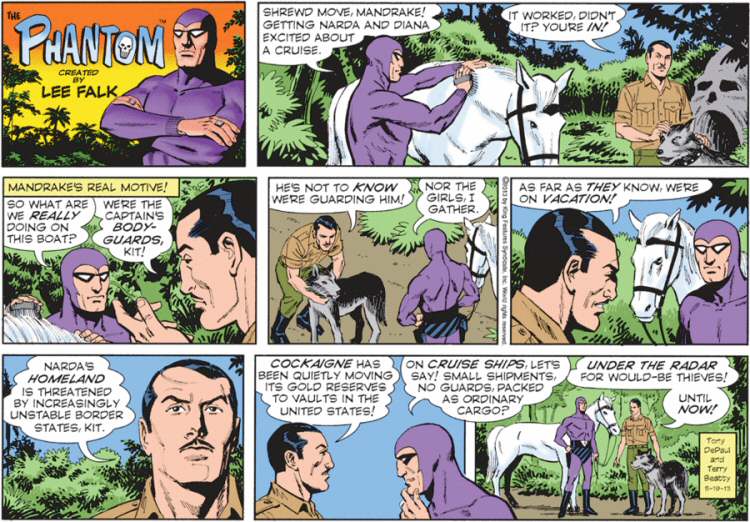 I confess to having been MORE THAN A LITTLE irritated with The Phantom for breaking off its Sunday series featuring crush object/murderess Savarna so quickly. But here’s Lee Falk’s other comics hero Mandrake, and he brought crush object Narda along, so I guess all is forgiven.

The story itself is, obviously, completely nuts. To safeguard the gold being trickled out of Cockaigne in cruise ships, the Walkers and the The_Magicians are embarking on a “Masquerade Cruise” that requires them to go around in different costumes every day as they browse the ship’s theaters, buffet tables, and slots parlors. Day 1 won’t be a problem, of course — they can just show up in their own outrageous get-up. But around Day 5 we should see the Phantom skulking in the shadows dressed as Marie Antoinette, and “Super Mario Brother” Mandrake gesturing hypnotically at Rainbow Brite. The “girls” will at some point dress as the Phantom and Mandrake, leading to some fun sexytimes below decks.

The cruise ship is, of course, headed for Acapulco, which means the gold of Cockaigne will wind up with the Parker-Spencers, unless of course April’s dad steals it first.

Update: Dr. Sail’s experiment is confirmed as Insect-Kewpie Mysta “Moon Maid” Tracy — cue Junior Tracy marital discord and ’70’s-era madness. It’s not yet clear how the Parker-Drivers will make a buck off this.

That’s it for me, folks — look for Josh to return on Monday with a new round of comics and your Comments of the Week. Thanks for a fun time, and your generous response to the spring fundraiser — see you next time!