Mark Trail is a pretty punchy guy, as you can tell from this collection of a few of his greatest hits. But Cherry, despite her reputation as a coffee-and-pancake-bearing hausfrau, is actually quite the little badass herself. Our gal can cinch up a pack mule, nail a beer can dead center in mid-air with a rifle no sissy shotgun for her no sir — and look damn fine doing it. As we see here, she can also slap the clear light of reason right back into an effete city-dwelling hysteric overcome by panic over some teensy forest-consuming sea of fire.

Or maybe not? Maybe Cherry isn’t trying to focus Shelley’s attention so much as rebuke her for disrespecting Wes? “Don’t you dare speak that way about your husband, Mrs. Wesley Thompson — what part of ‘Love, Honor, and Obey’ don’t you understand? And my own husband Mark loves these backwoods, ablaze or not: I will not stand for you to call them ‘stupid.'” Maybe behind all her woodsy competence, Cherry really is that traditional hausfrau, impatient for this annoying inferno to end so she can get back to her man’s side where she belongs?

Curtis struck a pose for his class picture so outrageous that even Chutney, despite her lifelong crush on him, doesn’t want a copy. But this strip works another way, too: on the very day Chutney finally decides to put Curtis behind her, he shows up with a photo of himself as a gift. She savors the moment and the memory of what felt like love for so long, then, true to her decision, sends him on his way — a loser in every important sense of the word.

Unfortunately, that would make Barry the strip’s principal character, and I’m pretty sure nobody wants that.

Oh man you guys Mary Worth has been such a garden of visual delights lately I can’t get enough of it. Check out the disembodied hand watering Elinor’s windowsill — maybe that’s Beth’s leftover hand from panel two? Speaking of which, our monopod young lovers may as well wrap up their tryst — those bushes have already engulfed Tom’s private parts.

Opening for Bung at the Laugh Zone tonight will be Travis Tritt and Marty Stuart singing The Whisky Ain’t Workin’.” Frankly, it’s not doing much for The Wizard of Id, either. 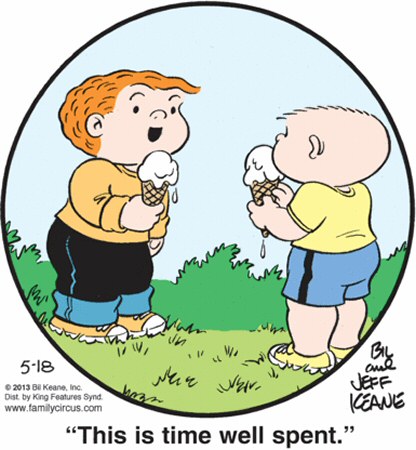 “It’s a nice day.”
“I like ice cream.”
“It is pleasant to be outdoors this time of year.”
“Punchlines are overrated.”