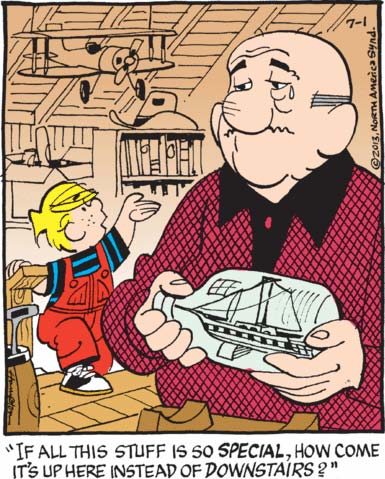 Mr. Wilson’s trademark bead of sweat, indicating a looming Dennis-induced psychotic break, is an often used visual trope in this strip. Today’s is particularly poignant however, as Dennis indulges in some marital menacing by innocently asking why Mrs. Wilson forces her husband to keep his most beloved possessions up in the musty attic rather than allowing him to proudly display it in the main living areas of the home, where guests can see. We almost might think that he’s crying, like a majestic weeping eagle, if we didn’t know that Mr. Wilson is incapable of sadness or remorse, only bottomless crotchety rage.

This Gil Thorp summer storyline is bound to get boring in short order, but let’s enjoy the madness while we can. Today’s panel two, depicting the carnage that remains in the aftermath of codger-on-ruffian fisticuffs, is more or less perfect. I love the fact that the napkins and condiments scattered about by the fight are foregrounded, while the two defeated punks are only semi-visible while draped and/or splayed comically at the top of the panel. Also, maybe they’re terribly injured or dead? Anyway, let’s call Gil in on this situation, why not, surely he’s got something to say about the whole thing.

Well, whaddya know! In Judge Parker, a leggy blonde is eagerly offering to fulfill a main character’s every whim! Don’t worry, though, this is Judge Parker, so those whims are super super boring.