Whew, the Amazing Spider-Man has escaped from another tight situation, everybody! I sincerely hope that our sassy pilot/flight attendant/epaulette enthusiast was carefully watching Spidey make his getaway over the Costa Verdan’s shoulder, drawing out his sentence with an unnatural pause between “you” and “that,” making sure that he didn’t say Spider-Man was off the plane until his body was completely out the door. That way he won’t get in trouble when he’s dragged off to one of this thuggish dictatorship’s torture chambers! Technically, he wasn’t lying.

The absolute best thing about this extremely sad/hilarious (sadlarious?) Herb and Jamaal is that I think what we’re supposed to take from Herb’s wistful gaze at the phone is that his mortgage company hasn’t called him back either. Look, Herb, we may be out of the worst of the housing collapse, but there’s still a huge backlog of mortgages in arrears and foreclosure, so your lender doesn’t have time to attend to your emotional needs, especially if we’re only talking about one missed payment here. 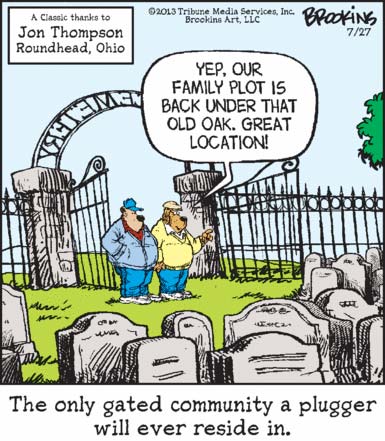 Wow, is this the most depressing Pluggers ever, more depressing than “Rhino-Man Hocks His TV?” “Pluggers will achieve the upper-middle-class status they wistfully yearn for only after they die.” Or maybe I’m misreading it. Maybe the panel is about plugger contempt for modern striving values. “Pluggers think your sad walled-off suburban development is a vast cemetery, your McMansion a 4,000-square-foot tombstone.”