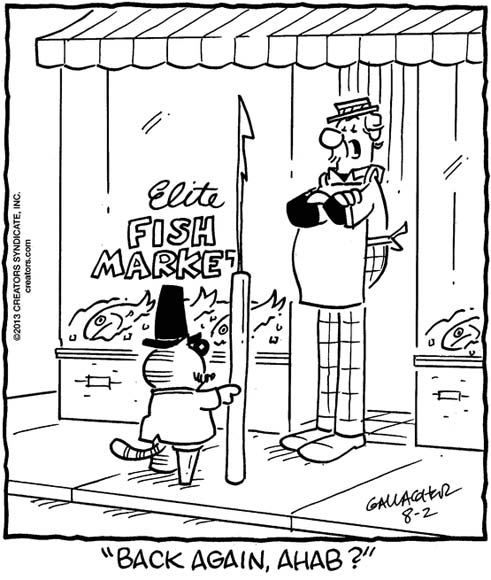 People, I have been terribly remiss in not informing you about an amazing live performance that you can see if you live in or near Baltimore! It is a water ballet based on Moby Dick, and it is being put on by Fluid Movement, the wacky Baltimore performance art troupe that I am occasionally affiliated with. I’m not in the show this year, but my lovely wife is, and I’ve seen the performance and it’s fantastic. There are shows at 5 and 7 p.m. this coming Saturday and Sunday nights at Baltimore’s Patterson Park pool. Behold the amazing poster!

You can buy tickets here and find out more information here and maybe see/say hi to me because I’ll be volunteering in some capacity. I can’t believe it has taken a Heathcliff cartoon to prod me into promoting it here! For real, though, I’ve known people who have performed in peg legs and Heathcliff’s is pretty hardcore. Based on the leg we can see, it’s clearly not something hollow that he’s stuffing his leg into. Is he walking about with his leg uncomfortably strapped behind his back? Or did he actually amputate his leg, just to pull off a flawless sight gag that barely impresses our fish merchant? He might’ve. Heathcliff doesn’t do things by half measures. Heathcliff keeps it real.

Hey, remember when this Apartment 3-G plot was going to be about the psychological trauma that combat vets face when they return to civilian life, and that could’ve been timely and important but they could have also screwed it up pretty badly? Well, now it’s about brain tumors. Can’t go wrong with brain tumors, right?

I am of course duty-bound by my Comics Summarizer’s Oath to let you know when violence breaks out in Mark Trail, so here you go! We all know Mark traditionally wears pants that are too short, which becomes pretty obvious when he kicks someone, but instead of wearing khaki socks like usual today he’s just showing off his sexy bare ankles, the tease.

Ever since Spidey’s daring/cowardly escape from his plane, much of his time in Costa Verde has been taken up by him loudly remarking to nobody in particular that he doesn’t speak the local language. This will definitely make him beloved when he meets up with his allies! There’s nothing Latin American revolutionaries like more than being shouted at in English.

I guess the Wizard of Id takes place in some pseudo-medieval era when even the basics of rudimentary statescraft were poorly understood, but still: ethics and accounting are not the same thing, guys!