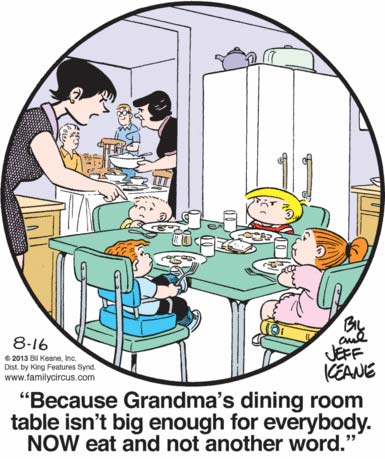 I freely admit to being charmed by the little drama in today’s Family Circus. It is a story told almost entirely in facial expressions. Dolly and Jeffy are largely uninterested in where they eat, so long as they get to eat soon; PJ doesn’t really understand what’s happening, but he can feel the anger in the air, and it makes him sad; Ma Keane is upset both about the sassback she’s getting and about the fact that once again she’s been assigned the role of the enforcer. And then there’s Big Daddy Keane and his eldest son, the axis around which today’s story revolves. Far in the background, but still deliberately made very visible to us, Daddy is practically glowing. It’s because he’s looking forward to an entire meal of adult conversation for once, of course, but it’s also because he’s getting to watch Billy get put in his place. Billy, meanwhile, is just as aware of what’s going on. He glowers back at his mother, seething at his banishment to the kitchen. Alone among the Keane Kids, he understands that the seating arrangements are based on status, and that he has fallen on the wrong side of the dividing line. Someday he’ll be at the grown-up table, he thinks, and the grown-ups will all be shut up in a nursing home somewhere, unvisited and unloved. Someday.

Finally, after showing the main characters lounging around in their underwear and threatening to show them in a bikini and actually showing them in a bikini and having them walk in on people wearing just a towel and order people to take their shirts off — finally the strip gets to depict a naked butt. Jokes on you, prudes! That naked butt is a naked statue butt, so it’s art. Can’t argue with art!

Crankshaft’s viscera are still bathed in enough bodily fluids to keep them functioning, in case you were wondering.