Mary’s long depressing walk in the desert with what’s-her-name where they talked about widowhood, which I found so boring that I’m not even bothering to dig up a post to link to, took for-frickin’-ever and I hated every minute of it. But this amazing “talk group”? It can go on for years as far as I’m concerned. Let’s everyone just let loose with some free-form anxiety/complaints! “My kids are out of control and I don’t know what to do!” “I’ve alienated everyone who’s every loved me!” Will Mary be so overloaded with meddling possibilities that she’ll shut down with smoke coming out of her ears, like a computer from the original Star Trek confronted with an elementary logic paradox?

Oh, man, is Gil Thorp going to get in trouble for breaking kayfabe and revealing to the world that pro wrestling is staged? Not sure what the punishment for Gil Thorp the strip will be, but Gil Thorp the guy will be punished by getting into the ring with a man who’s quite physically fit but isn’t mentally all there, and who might have a hard time sticking to the script that they only half-assedly worked out.

Check out those weird circular wrinkles around the base everyone’s neck in this comic. Almost as if they’re wearing a garment the exact color of their skin? It appears that for the past eight years or so, Dagwood has continued his habit of wearing shirts made out of human flesh, and has even convinced the local youth to join his nightmarish death cult. 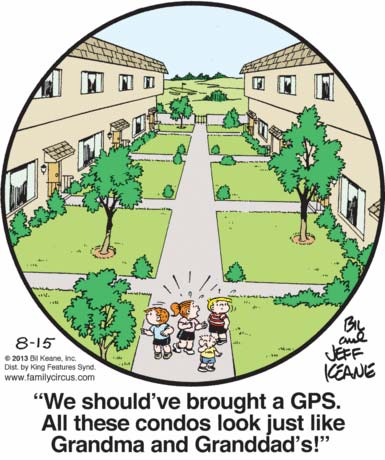 If the Keane Kids are going to wander through this sterile, baffling condo complex for days and eventually starve to death, as I assume they will, it’ll be kind of appropriate that they were literally killed by suburban conformity.

Here is a comic about a sexually aggressive dragon, enjoy!