Haha, so, wait, Tarantula … doesn’t have spider-powers? He just picked the name “Tarantula” and dresses up in a costume because it seems cool and bad-ass and vaguely theatrical, I guess. He does have the power to perfectly imitate a non-Spanish-speaking American, though, and that’s nothing to sneeze at!

This story seems destined to end in pleasingly farcical fashion, with the despot’s MPs having their heads mutually konkked by the only quasi-capable Spider-Man. Just to add to the air of general low-stakes incompetence, I’d like to point out that the Condor had sent for his marksmen because he apparently doesn’t trust his regular soldiers to successfully shoot a bound man standing only a few feet away.

NEW FUNKY WINKERBEAN CHARACTER, EVERYBODY! Meet Jarod, with his oversized trenchcoat and black shirt and cigarette and sneer and screw-the-man attitude. He’s definitely bad news, though it’s unclear yet whether he’s the “will bedevil the viewpoint characters and demonstrate how the Kids Today are terrible” kind of bad news or the “we’ll learn each and every trauma heaped upon him in his life that made him the twisted man you see before you” kind of bad news. In the short term, though, I question whether Bull can really get him into any kind of trouble for smoking, because based on that retreating hairline I’m assuming he’s at least 30. 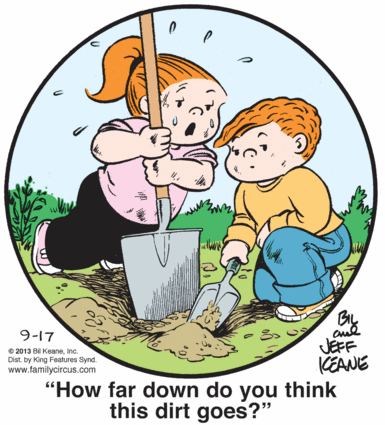 Boy, Dolly and Jeffy sure seem awfully sweaty and tired considering they’ve only gotten maybe three or four inches into the ground. C’mon, kids, it’ll take all day for you to dig your own graves at this rate!