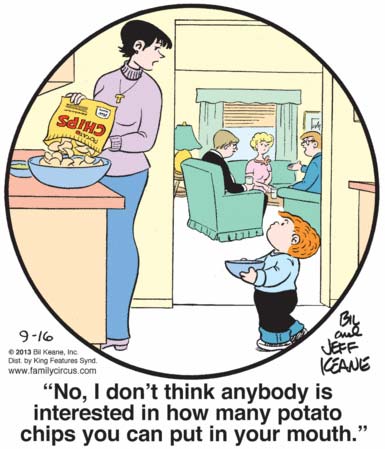 Check out the conversation happening in the background of this panel. Big Daddy Keane is gesticulating and going on and on in deadly earnest; his female guest has carefully composed her face and placed her hands in her lap, trying to look attentive; his male guest is settling into an ever-deepening slouch, hoping the talking will stop, soon. Is Daddy extolling the virtues of his favored candidate for the local state senate district? Pitching them on joining his Amway downline? Just not shutting up about how things were better in his day, and if we just whipped society into shape we wouldn’t have all these problems? Whatever the case, both those poor souls look like they would be seriously cheered up by a little kid walking in there and cramming more potato chips into his mouth than anyone would’ve though humanly possible. 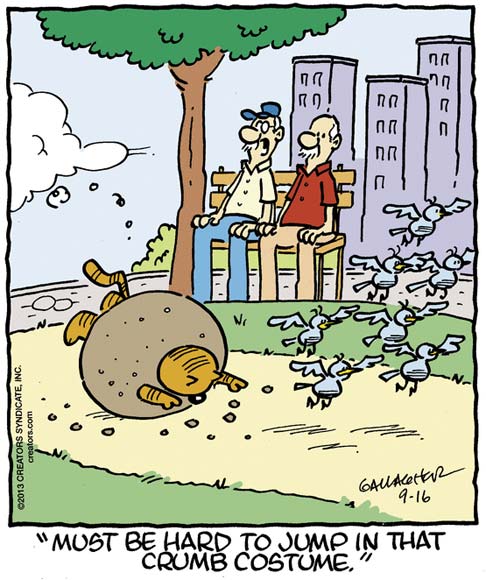 These cowardly birds are giving up their greatest chance to overthrow their cat oppressor! Look at him, lying there, immobile, defenseless, the tender flesh of his face and limbs and tail exposed to attacks from revenging beaks.

Enjoy your minor victory of ratiocination now, Slylock! When the newly arrived UFO aliens begin processing all of Earth’s organic matter — sapient animals, remnant humans, and plants and fungi alike — into a high-grade food slurry that will be shipped to the Proletarian Caloric Dispensaries on the capital planet of their intergalactic empire, it will all very much not matter.

Relaxing and snoozing? Do the Hobbs kids know how to party or what?