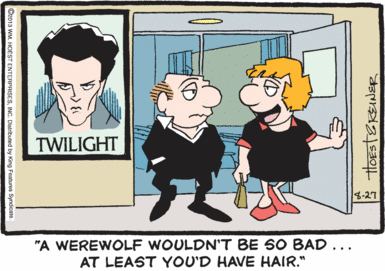 This isn’t the first time that Loretta and Leroy have gone to see one of the Twilight films, but it’s always jarring and delightful when a smidgen of contemporary pop culture forces its way into the Lockhorns’ eternal 1962, isn’t it? I am also 100% in love with the fake Twilight poster hanging up at the Lockhorns’ local cinema. It reimagines Robert Pattinson’s dull, pasty visage as the brooding face of a proper Weimar-era expressionist vampire. And the graphic design! Doesn’t the striking image of the undead fiend’s face floating over the single word “TWILIGHT” have a million times more impact than, say, this piece of overbusy airbrushed garbage? Kudos, Lockhorns, for daring to imagine a better world than ours.

“The specific reason is that I have no friends and no life and writing advice to people desperate enough to send me letters is literally the only thing that gives my existence the barest shred of meaning! Uh, I guess I sort of covered that earlier, but that’s the much more specific version.” 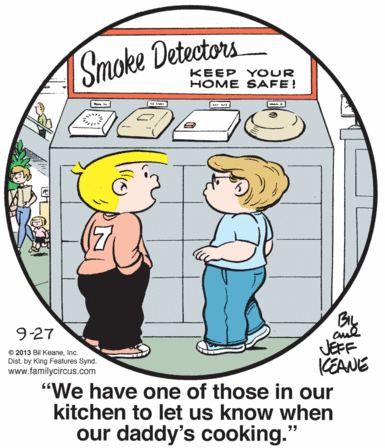 “I mean, he’s a competent adult and he could just learn how to cook properly, but I guess he figures that if he does, that’ll undermine the whole patriarchal structure that gives him power. So, your parents abandoned you at the world’s dullest mall kiosk too, huh?”

Huh, had it been established in this strip that the Perfesser’s mother is still alive? I guess it never hurts to introduce a new character in order to set up a hilarious joke! In this case, the joke is that an old man dropped dead during a social event for senior citizens, which probably cast a real pall over the rest of the evening.

Meanwhile, the streets of Riverdale are haunted by roving packs of vicious feral dogs.