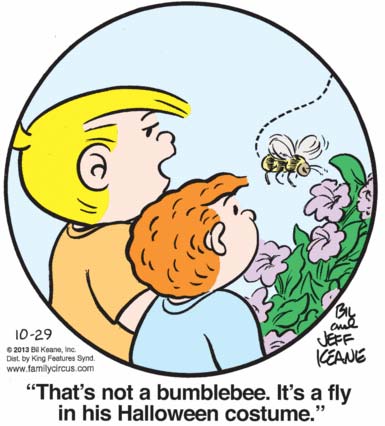 You can criticize the Mommy and Daddy’s decision to keep the Keane Kids forever bottled up in the Keane Kompound, with the resulting stunting of their psychological, intellectual, and physical development obvious in every Family Circus panel. Still, you have to marvel at how even in their stunted circumstances, their imaginations soar. Sure, they’ve been denied contact with any biological texts outside of Genesis 2:20, but that hasn’t stopped them from coming up with their own charming and whimsical explanations for what they observe of the natural world. What would their parents say if they could hear their precious children’s simple just-so story? Probably it would involve scouring the Kompound for hidden radios to try to stop any further knowledge of “Halloween” reaching the children. 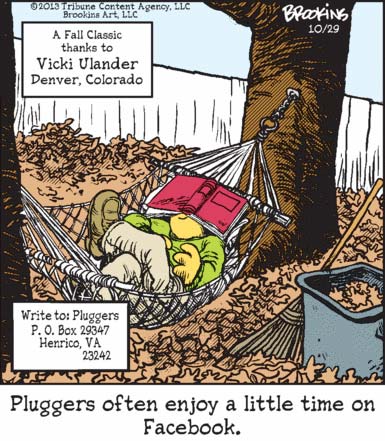 Haha, it’s Tuesday a day of a week, so here’s a couple of comic strips making ham-handed jokes about Facebook! Rachel (her name’s Rachel, right? it’s actually remarkably difficult to find a complete list of Funky Winkerbean characters online) is trying to engage Funky on how he’s coping with Cory, his disappointment of a son (stepson? I’m honestly kind of pleased with my inability to pull up Funkyfacts from memory), being deployed in Afghanistan. As you can tell from Funky’s disgusted facial expression, he doesn’t want to talk about it! Yesterday he claimed that he’s never been on Facebook because “I’m an adult” (fun fact: the average age of a Facebook user is 41). Today he expressionlessly make a joyless sup-pun about how Skype, another technology he can’t be bothered to deal with, allows soldiers in a war zone to still feel connected to loved ones back home, and perhaps hold onto a little bit of their sanity. As long as those loved ones aren’t Funky Winkerbean, anyway! Funky has no desire to learn about fancy screen-phone whosits. Funky is also incapable of feeling affection for another human being, so what would the point of talking to him even be.

Pluggers, in its typical way, is taking a much simpler route to a laff. Whether you’re talking about a scary “web site” on the computer thingie that we guess we have to look at if we want to see the grandkids’ pictures now, or an actual physical book written by nerdlingers who think they’re smarter than us, “facebook” makes us sleepy! Zzzzz.

How terrifying must it be to be poor, simple Archie Andrews? Imagine being so acutely aware of your own intellectual limitations that you live in constant terror of your mind being erased by some awful cerebral event, but too dumb to know what what such an event might feel or sound like!