Good news, everybody! The weird, svengali-like power Johnny Walker held over the poor innocent senator has at last been fully explained, now that he’s a smear of human hamburger at the bottom of a cliff. Fortunately, Johnny’s death will immediately remove this pall hanging over our heroes. Once the authorities learn that Johnny was responsible for all the wrongdoing, and that he died under bizarre circumstances with only the senator and his close friends and family as witnesses, the case will be closed and everything will go back to normal, just like it was before!

Normally I’d make fun of this strip for completely abdicating on actually drawing a Miley Cyrus costume and just leaning on “haha, it’s funny because they said ‘twerking'”, but then I thought: do I want to see Team B.C.’s idea of what a teen girl ant wearing a Sexy Miley Cyrus outfit would look like? Does anyone? Answers: No, and, I’m reasonably certain, no. Let’s just enjoy the bullet we dodged. Ha ha, those prehistoric ants just said “twerking,” everybody! They’re just like us! 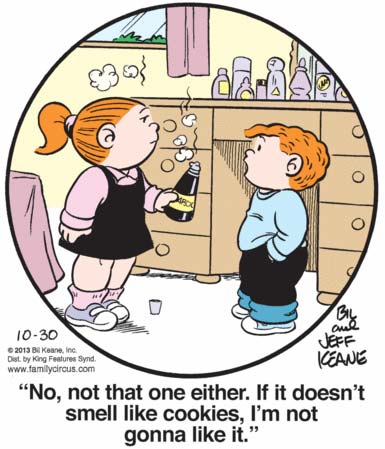 I love Dolly’s expression of vague disdain. God damn it, Jeffy, do you want to learn how to huff or not?

Ha ha, those army guys sure have a sense of gallows humor and/or complete lack of historical knowledge! Anyway, Cory and his whole platoon are going to die.