I’ve settled into a sort of Stockholm Syndrome thing with Funky Winkerbean, where I’ve decided that, since I’m apparently going to keep reading it indefinitely, and it’s going to keep being an endless pit of misery and death indefinitely, I’ve got to figure out how to enjoy it. My current strategy is to enjoy it when the misery and death happen to characters I particularly dislike, so this week’s plot, which has been focused on Les’s inability to write a maudlin direct-to-cable movie about his wife’s death, has been pretty pleasing to me. You might recall that this story began months ago with Les getting a fat check and then getting smug about some of the clunkiest dialogue ever written. But now he’s realized that he can never write a script about his beloved dead wife, because he can’t really imagine what her thoughts were, probably because when she was alive he was too busy thinking about how her various life tragedies were affecting him emotionally to really get to know her. Somehow this didn’t prevent him from writing a best-selling memoir about her, of course, but to write a screenplay he needs to know her every thought, since obviously movies focus much more closely on characters’ internal emotional lives than books do.

Anyway, the Les-suffering is unfortunately about to end, because now he’s going to read Lisa’s diary! The diary he swore never to read, for some reason! This will solve all his problems and probably he’ll just take big chunks of prose out of the diary and use them in his screenplay and he won’t even have to pay Lisa for it, because she’s dead.

Speaking of death, I’m dying with laughter at Governor Sexy having his extremely public marriage proposal interrupted in one of the most humiliating ways possible. The YouTube video of this delightful moment will of course go viral, with the autotuned version “I Have To Take This Call (It’s Marty)” becoming a surprise novelty hit on iTunes. 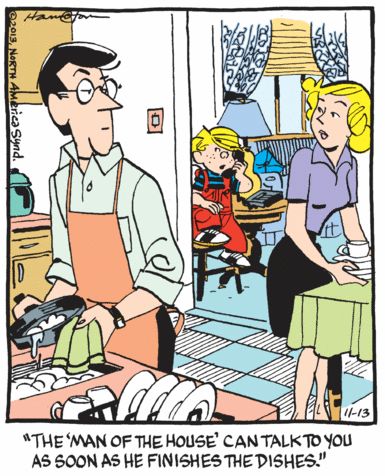 Everyone in the Mitchell family takes on whatever chores need doing, dividing them up equitably without regards to outdated gender norms, and Dennis doesn’t care who knows it! He truly is a menace — to the patriarchy.

Frankly, the whole “Momma was very cold outside” angle of this strip seems overly complex, don’t you think? I mean, Momma is haunted by the grim spectre of death at all times and would presumably be quick with a depressing quip in response to a “Isn’t it great to be alive” no matter what the circumstances, though she might lean less towards “Let me check to see if I’m still alive” and more towards “I am alive and it isn’t great at all; it’s actually quite awful.” Still, the way MaryLou is leaning on the question, combined with Francis’s sly look, makes me think that something more is up here, like maybe they dumped her a snowdrift a mile away and made her walk back home, and are now trying to subtly ask her if she’s dead or not.

Ha ha, it sure is hard to keep up with the slang that the kids today use! In unrelated news, Alexander suffered some kind of traumatic brain injury at football practice.